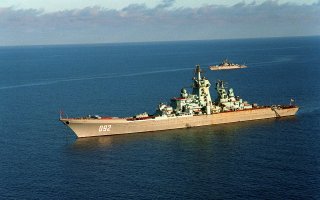 Arming a battle cruiser with hypersonic missiles would be a substantial step forward when it comes to changing and upgrading the offensive firepower of the 1980s-era Russian battlecruiser Admiral Nakhimov. An interesting article in Forbes magazine says the Russian ship is “almost as large as the Iowa-class” battlecruisers and would well become the “most powerful surface combatant in the world.”

What might make it so powerful? That depends upon the scope of the upgrades, and particularly the extent to which they increasingly incorporate high-speed computer processing, long-range sensor networking and new “fire control.”  Should these systems be brought into the modern era, then an upgraded heavily armed ship would indeed present a massive threat to U.S. and NATO forces. The Admiral Nakhimov is being upgraded with ship-tailored Fort M missiles, an upgrade to Russia’s S-300 type anti-aircraft defenses, land-attack missiles, AK 192 guns, close-in defenses and new anti-submarine weapons.

All of this raises interesting questions about how these kinds of armaments might compare against heavily armed U.S. Navy destroyers. Can these interceptor missiles, both short- and long-range, rival the SM-3 and SM-6 medium and closer-in weapons forming the U.S. Navy’s layered defense system. Could the Russian battlecruisers upgraded long-range missiles rival the U.S. Tomahawks? Is the Russian Close-In Weapon System (CIWS) comparable to the U.S. Navy’s upgraded weapon which fires a Phalanx area-weapon to take out incoming small boats, drones, explosives or other kinds of close-in threats? As part of an integrated system of defenses, many Navy ships are also armed with deck-launched interceptor missiles for medium- to short-range attacks, such as SeaRAM and Rolling Airframe Missiles.

Finally, both a U.S. Navy destroyer and an upgraded Russian battlecruiser would operate with drones and helicopters able to conduct reconnaissance, hunt submarines and even lead forward attacks on the ocean. While a Navy destroyer would be smaller than a large, modernized Russian battlecruiser, its high-tech weaponry may give it a distinct advantage in any kind of open or “blue-water” maritime warfare engagement.  This would likely depend upon the performance and relative technological capacity of the upgraded weapons. The U.S. has been massively upgrading Tomahawks, SM-6 missiles, CIWS and SeaRAMs with extended range, an ability to hit moving targets at sea and new generation of guidance systems, so it would be critical to have an understanding of the state of relative sophistication of these Russian weapons and, perhaps to an even larger degree, how well are they networked with other ships, drones or even submarines coming to the surface for wifi connectivity.