What, Besides Climate Change, Caused the California Wildfires? 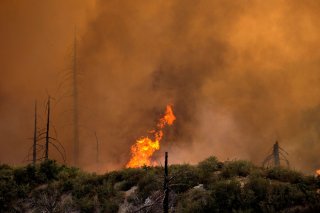 Despite some progress made by heroic firefighters, wildfires continue to tear through the West. Tragically, the fires have taken more than 30 lives (with many more missing), destroyed thousands of structures, and burned millions of acres.

Here are answers to some of the commonly asked questions on causes for the wildfires and obstacles that stand in the way of solutions.

What caused the wildfires?

At least several factors. At the end of August, a storm with a lot of lightning and little rain struck. An estimated 11,000 lightning strikes hit California over a three-day span, sparking fires throughout the state.

More recently, two of the fires started because of hot soot from a car tailpipe and a family using a “smoke-generating pyrotechnic device” for a gender reveal party. One man in Oregon has been charged with arson.

Investigations continue into the causes of some of the fires. In the past, campfires, discarded cigarettes, fallen power lines, and arson have been the culprit.

Despite accusations that extremists on both the left and right set certain wildfires, neither has been the case. In fact, false rumors have served only to spread resources thinner and detract from serious investigations.

Are these fires the worst ever? Are wildfires more frequent and destructive?

The more than 3.2 million acres burned thus far in California are the most in recorded history.

According to the California Department of Forestry and Fire Protection, data over the past 30 years shows that the number of fires is on a downward trend while the number of acres burned is on an upward trend.

However, as Mother Jones reports, ecologists and fire scientists estimate that prehistoric fires were worse, burning between 4.4 million and 11.8 million acres per year.

On a national scale, data from the National Interagency Fire Center shows a downward trend for both fires and acres burned from 1926 through 2019, though reporting methods differed before 1983.

Why have the wildfires been so severe?

California is a hot and dry place. The winds can be fierce this time of year and the steep slopes of the topography can make them practically unstoppable.  Although the winds come every year, they’re also unpredictable.

Alexandra Syphard, an ecologist at the Conservation Biology Institute, noted that “wind-driven fires are the ones most associated with catastrophic losses” because of their difficulty to contain and propensity to reach places where people live.

Then there’s the fuel load. Without proper management, whether prescribed burns or timber harvesting, California is a tinder box comprised of dry trees, grass, and shrubs. Invasive species, including grasses and shrubs, also contribute to worse wildfires because they dry out and have a higher likelihood of burning than native plants.

Better land management long has been understood as a necessity to reduce the severity of fires. Malcolm North, of the U.S. Forest Survey, says: “Climate dries the [wood] fuels out and extends the fire season from four to six months to nearly year-round. [B]ut it’s not the cause of the intensity of the fires. The cause of that is fire suppression and the existing debt of wood fuel.”

Timothy Ingalsbee, executive director for Firefighters United for Safety, Ethics, and Ecology, told ProPublica: “We need to get good fire on the ground and whittle down some of that fuel load.”

If controlled burns and thinning forests are effective, why are they so hard to do?

California’s fuel load has been a long-standing, worsening problem and a top priority for ecologists and land managers who want to reduce the severity of wildfires.

Jon Keeley, senior scientist at the U.S. Geological Survey’s Western Ecological Research Center, said: “We ought to be much more concerned with ignition sources than a 1- to 2-degree change in temperature.”

Prescribed burns (see photos here) are an effective, non-controversial way to reduce the fuel load and consequently reduce the destruction caused by a wildfire. Fires also help  to control pests, to remove non-native plants, and to provide nutrients to trees and other vegetation.

As the narrator says in this National Geographic video: “Giant sequoias depend on fire to reproduce. The heat opens their seed cones, their seeds are released, the flames clear the earth for their germination. While lesser trees blaze around them, the giant sequoias stand virtually unscathed by the flames.”

Studies have shown that these prescribed burns do not harm the ecology of the forest. California has implemented controlled burns for an average of 13,000 acres from 1997 to 2017. But a February article in the journal Nature Sustainability suggests that California needs about 20 million acres burned.

Controlled burns are by no means a silver bullet, but an overwhelming consensus exists among land managers that such burns are the most immediate and effective action to take.

As for why that hasn’t happened, the same article in Nature Sustainability breaks it down to three categories: risk, resources, and regulation.

Some have concerns about the smoke from controlled burns, and that the fires may get out of control; others have concerns over liability should that occur. Even so, the practice largely has won public acceptance.

Another barrier is presented by weather and location. Controlled burns take into account ideal humidity ranges, as well as wind direction and speed. Some controlled burns occur where there are power lines or pipelines, which require additional attention. COVID-19 postponed many of the prescribed burns.

Regulation presents a major obstacle. Prescribed burns go through a lengthy approval process. Securing a permit can take up to 18 months.  These burns are subject to the National Environmental Policy Act and must meet federal, state, and local air quality standards.

Of course, the pollution and air quality is much worse from the wildfires than from a controlled burn. Even when a plan seemingly checks all the necessary boxes, it still may be held up in the courts. Although some progress has occurred to expedite the process, more needs to be done.

Another solution is timber harvesting, which helps thin the landscape and put those resources to productive use.

What is the role of climate change?

It stands to reason that as the planet warms, the American West will become drier and states’ wildfire seasons will be longer. The planet has been in a warming period for the past 160 years, and part of that warming is a result of human activity.

One study out of UCLA estimates that the number of days with extreme fire weather in the fall has more than doubled over the past 40 years. Another study in Earth’s Future found similar results for warming’s effect on fuel drying, but noted that a changing climate has not affected wind or precipitation patterns:

In fall, wind events and delayed onset of winter precipitation are the dominant promoters of wildfire. While these variables did not change much over the past century, background warming and consequent fuel drying is increasingly enhancing the potential for large fall wildfires.

Cliff Mass, a professor of atmospheric sciences at the University of Washington, emphasizes that even without the warming that is occurring, fuels are “plenty dry enough to burn already.”

Soil moisture is another factor that can determine how severe a wildfire might be. Last year, in a very mild season, soil moisture in California was 40% above average for most of the state and even higher in some parts.

Droughts can be both bad and good. Droughts obviously create a dry climate for vegetation to burn, but extended droughts can result in less fire because, as NASA’s Ben Cook points out, “the vegetation will not grow back as vigorously, and you may run out of fuel to burn.”

Some parts of California, such as the area where the Camp Fire wildfire occurred in 2018, saw no discernible trend in fuel moisture or precipitation, but the winds were strong enough to dry out the vegetation anyway.

Which brings us to another point of the discussion: how climate change affects wind patterns. California is known for intense winds, such as the Diablo winds in the north and the Santa Ana winds in the south.

Several studies show that warming actually could reduce the frequency of the Santa Ana winds and potentially weaken the pressure of Diablo winds. If precipitation patterns change, however, that merely might push the wildfire season from the fall into the winter.

That’s to say that the link between climate change and wildfires exists, but it also is quite complex.

What about where we live, and housing policies?

Residents of the West are moving to more fire-prone areas. The New York Times podcast “The Daily” explains that this is called the Wildland Urban Interface, where development meets wild vegetation.

People choose to live in more rural areas for a host of reasons. They may want to be closer to nature and where houses are more affordable. The higher number of homes and businesses in these areas also increases the likelihood of a human-induced fire and puts more lives and structures at risk. These threats as they pertain to the Wildland Urban Interface are not specific to California, but exist in many places around the country.