What Could Have Been: The F-14 Super Tomcat 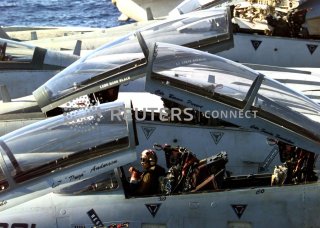 When Top Gun came out in 1986, the aviation-themed film proved to be such as success in creating interest in naval aviation that the Grumman F-14 Tomcat became almost as much a star of the movie as Tom Cruise. It wasn't actually the F-14's big-screen debut, however, as a pair of F-14 aircraft had been featured in the 1980 science fiction war film The Final Countdown. Four more F-14s—from Fighter Squadron 84 (VF-84), nicknamed "Jolly Rogers"—also appeared in the 1996 action-adventure Executive Decision.

The supersonic, twin-engine, two-seat, twin-tail, variable-sweep wing fighter aircraft had been developed for the United States navy's Naval Fighter Experimental (VFX) program and was the first of the American "Teen Series" of combat aircraft that were designed to incorporate the experience gained against MiG fighter during the Vietnam War.

The F-14 had gone through several updates, with the F-14D Super Tomcat being the final variant. The first of these was delivered in 1991, and these featured extensive changes to the avionics and displays. The F-14D was notable for being able to engage in multiple targets more easily than its predecessors. The aircraft was to be the definitive Tomcat and perhaps would have been. But in 1989 after massive cost overruns and huge delays, then-Secretary of Defense Dick Cheney proved more deadly than a Soviet fighter pilot. He shot down the purchase of any more F-14Ds—which likely made sense at the time as the Cold War was coming to an end.

Instead, the Navy only received thirty-seven of the new F-14D Super Tomcats, while eighteen older F-14A models were updated to the D-models, designated as F-14D(R) for rebuild.

Had things played out differently, an even more advanced version of the Super Tomcat could have taken to the skies. Described as an "Evolutionary" upgrade of the F-14, the ST21 (Super Tomcat for the 21st Century) would have added more fuel capacity and even an active electronically scanning array (AESA) radar that had been developed for the canceled A-12 attack aircraft.

The ST21 essentially grew out of a previous proposal that had been made by Northrup Grumman after the A-12 program was ended. It was to be called the Tomcat Quick Strike, which was meant to upgrade the existing F-14s by providing them with high-end navigation and targeting pods similar to the United States Air Forces' LANTIRN system, as well as upgraded ground attack modes for the F-14D's APG-71 Radar. The newly improved aircraft could have had the ability to carry more standoff weaponry including the AGM-84E SLAM and AGM-88 HARM.

As Jalopnik.com reported, when that project didn't actually move forward, Northrup Grumman came back to the Navy with another "Super Tomcat," dubbed the Super Tomcat 21.

"The Super Tomcat 21 would be a modification of the original F-14 design and it was to feature GE-F110-129 motors that would allow the Tomcat to super-cruise (achieve Mach 1+ without using afterburner) continuously at Mach 1.3. Additionally, the jet would have an upgraded APG-71 radar, modified and enlarged control surfaces, and enlarged leading-edge root extensions (LERX) that would house more fuel and enhance the jet's low-speed handling capabilities," Jalopnik.com reported.

Those modifications would have given Tomcat true super-maneuverability, sustained speed and peppy acceleration. As with the Tomcat Quick Strike, the new ST21 would have been able to carry targeting and navigation pods to provide it with true multirole fighter capabilities.

The aircraft would have featured a single-piece windscreen for enhanced visibility, with a wide-angle raster-scan HUD capable that would have been capable of projecting FLIR imagery and a Digital Flight Control System (DFCS).

The ST21 was proposed as a lower-cost alternative to the Navy Advanced Tactical Fighter (NATF), but it could have been more. It would likely have led to a host of even more advanced Tomcats, including an Attack Super Tomcat (AST21), which could have featured nuclear weapons capability and bomb stores under the engine nacelles.

"The Tomcat's ultimate proposed configuration was known as the 'ASF-14' would be a new build, highly updated version of the legendary F-14," Jalopnik added. "A true 'Super Tomcat' in every sense of the word, the machine would boast an even larger increase in internal fuel over the Super Tomcat 21 via thicker wings, the gutting of bulky older generation sub-systems and the use of carbon fiber structural components to save weight and volume."

However, none of it was to be. The Navy decided to fill the role of fighter/attack aircraft with the F/A-18E/F Super Hornet, and the F-14 Tomcat was finally retired on September 22, 2006. The Super Tomcat 21 instead remains one of the more fascinating examples of what could have been.