What Do Rising China-US Tensions Mean for the UN? 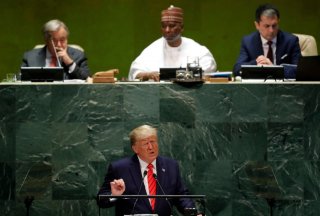 As the General Assembly’s 75th session wraps up on Wednesday, it’s been a dramatic time at the United Nations.

Usually, this is the time of year when world leaders come to New York to mingle and mix. There were also great plans for the UN’s 75th anniversary celebrations.

Instead, due to COVID, we saw most leaders address the assembly by video link.

The session also opened with UN Secretary-General António Guterres warning, “today, we face our own 1945 moment”, speaking not just of COVID-19 but “the world of challenges to come”.

China vs US on the global stage

Guterres specifically spoke of his fear of a “great fracture” between the US and China. This was quickly on display as the US and Chinese leaders delivered contrasting speeches.

United States President Donald Trump used his address to blame China for coronavirus, calling it, “the nation which unleashed this plague onto the world”.

China’s President Xi Jinping tried for a more inclusive tone, with his comments framed in support of multilateralism.

We should see each other as members of the same big family, pursue win-win cooperation, and rise above ideological disputes.

We have been here before

The good news is, the UN has weathered dramatic moments and challenges before.

Indeed, in the history of fiery UN speeches, Trump’s tirade — largely aimed at the US audience — wouldn’t rate that highly.

In 1960, USSR General Secretary Nikita Khrushchev called a Philippine delegate a “toady of American imperialism” and famously brandished (but did not bang) his shoe.

Read more: UN general assembly: why virtual meetings make it hard for diplomats to trust each other

In 2006, Venezuelan President Hugo Chavez called then US President George W Bush “the devil” and complained of the smell of sulphur. There was also a mass walkout in 2011, during Iranian President Mahmoud Ahmadinejad’s attack on Western “slave masters and colonial powers”.

What does the UN actually do?

When considering the future of the UN, we also need to think about what it is there for.

The role of the UN is to provide a space for countries which often don’t agree to take limited collective action. The UN’s main bodies include the General Assembly, with a seat for each member country, and the smaller Security Council for responding to threats to peace and security.

Alongside these are a range of specialised agencies that do mostly non-controversial work. These include the International Civil Aviation Organization, World Meteorological Organization, UNICEF and the World Food Programme.

Countries approach the various parts of the UN differently. They use the bully pit of the General Assembly for rhetoric and bombast but cooperate in the Security Council, where it’s in their interests. For the most part, they let specialised agencies get on with their practical work.

During the Cold War, debate in the General Assembly was heated and the Security Council could not act due to the Soviet and US veto. But the UN survived.

As many, including former US Secretary of State Madeleine Albright have noted, “if [the UN] didn’t exist, we would invent it”.

The key to understanding the UN is having realistic expectations. At the height of the Cold War, then UN Secretary-General Dag Hammarskjöld famously said,

[The UN] was not created to take mankind to heaven, but to save humanity from hell.

What the UN can do, even when key members are at loggerheads, is keep the basics of international cooperation going. It has shown great resilience, even during the height of the Cold War, progressing important issues such as decolonisation, arms control, peacekeeping, racial discrimination and the rights of the child.

Sometimes members countries decide the UN should take a lead role on an issue, such as the Sustainable Development Goals.

At other times, they don’t. For example, COVID-19 has seen individual national responses more than coordinated action. But the continuing existence of mechanisms for information-sharing, like the World Health Organization, remains important.

What are we likely to see at the UN from now on?

We can safely assume there will be more combative rhetoric. The US and China didn’t have brilliant relations before this meeting and it is likely things will continue to deteriorate.

International organisations will be one of the many battlegrounds for China-US competition, where they will take different approaches.

Trump’s speech last week exemplifies the US turn away from multilateralism. During his administration, the US has withdrawn from the UN Human Rights Council, World Health Organization, the Paris Agreement on climate change and UNESCO (for the second time). If Joe Biden wins the presidential election in November, this may moderate the US approach, but American exceptionalism runs deep.

In contrast, China doesn’t question the legitimacy of the UN as the peak universal institution. Its approach is to redefine the UN’s conception of world order to its liking and to push for more influence within it.

a lot of the UN’s members think the US is destructive and China is power-hungry. They don’t find either very appealing.

In Guterres’ address this week, he warned the world cannot afford a future where “the two largest economies split the globe in a great fracture” — each with their own trade, financial rules, internet and artificial intelligence capacities.

Make no mistake, the conflict between China and the US is a significant challenge for the UN. But it has 75 years’ of experience to handle it.

It now has to work to keep two contending great powers engaged in the international system, while progressing its mission to promote peace, dignity and equality on a healthy planet — at least as much as its members allow.