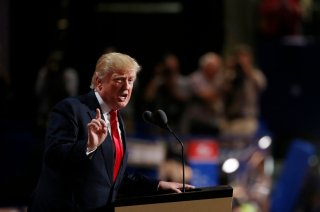 At the Republican National Convention, supporters of President Trump’s reelection bid have celebrated his attempts to build a Mexico border wall, his promise to “bring our troops home” and his pledge to end U.S. “reliance on China.”

All are components of the “America First” agenda Trump ran on in 2016. Back then, he promised to “shake the rust off America’s foreign policy.”

Four years later, it’s clearer what this looks like in practice. As a foreign policy analyst, I find Trump’s “America First” vision has had three primary strands: disengaging the U.S. from global politics, disdaining allies and befriending autocratic leaders.

Early in Trump’s administration, the U.S. exited the Trans-Pacific Partnership, a trade alliance of mostly Asian countries, and the 2015 Paris climate accord. In May 2020, with the United States leading the world in COVID-19 infections, Trump cut funding for the World Health Organization, which is spearheading the global pandemic response.

Trump prefers bilateral deals, in which the U.S. usually is the stronger partner, to multilateral agreements in which its power is offset by many other nations.

His administration’s new U.S.-Canada-Mexico trade agreement has moderate improvements over the original North American Free Trade Agreement, including stricter labor standards in Mexico. But other pledges to replace scrapped deals with better ones remain unfulfilled.

Trump has not yet come up with a “tougher” agreement to the 2015 Iran nuclear deal, nor followed up on his pledge to “negotiate a far better” international climate deal.

As a result, the U.S. has sat on the sidelines of major world crises and international collaborations for the past three years.

New U.S. immigration policies like the Muslim immigration ban and refusal to grant admission to most asylum seekers, both very popular with his base and abhorred by Democrats, further isolate the country from the world.

In June, the administration even stopped issuing to immigrants most work visas and new green cards, claiming they were hurting American citizens on the job market during the pandemic. That angered major American companies like Microsoft and Apple, which depend on those international skilled workers.

“America First” has led to tense relations with the European Union, which Trump referred to as a trading “foe” during the 2016 election campaign. He further alienated America’s European allies when he repeatedly came out in support of Brexit – the disruptive British exit from the EU – and encouraged other EU countries to follow Britain’s lead.

In 2018 he told advisers on several occasions that he was considering withdrawing the U.S. from NATO, the North Atlantic Treaty Organization founded in 1949 to militarily protect European and U.S. interests.

These are huge divergences from the past. All Republican and Democratic presidents since World War II have expressed strong – and crucial – support for a united Europe and for NATO.

In Asia, relations with longstanding allies are likewise frayed. Trump asked South Korea and Japan to double or even quadruple their financial contributions to keep U.S. military bases on their soil, apparently failing to realize that these bases give the U.S. a strategic presence in a region dominated by China and North Korea.

Trump believes his three meetings with North Korean leader Kim Jong Un in 2018 and 2019 – a landmark initiative of his administration – fixed the North Korea threat. But most analysts find North Korea was actually emboldened by American diplomatic engagement. It is now speeding up its nuclear program.

Conciliatory behavior toward Kim is part of a trend: Trump has embraced some of the world’s most notorious dictators and autocrats.

In Europe, Trump is on good terms only with the proudly undemocratic leaders of Hungary and Poland. He called Egyptian leader Abdel Fattah el Sisi “my favorite dictator” and refused to punish Saudi Arabia after Crown Prince Mohammed bin Salman was implicated in the brutal murder of the Saudi Washington Post columnist Jamal Khashoggi in October 2018. Instead, the White House permitted two U.S. companies to share sensitive nuclear power information with the Saudis.

The administration’s relations with Russia, which surreptitiously aided Trump’s 2016 campaign, are unusual.

On the whole, his government has pursued a tough policy toward Russia, including imposing harsher sanctions and deploying new NATO forces to the Polish border to protect Eastern Europe.

But Trump has denied Russian interfered in the U.S. election, and he talks to Putin more frequently than he does to allies like German Chancellor Angela Merkel or British Prime Minister Boris Johnson. In June he pressed those leaders to invite Putin to a G-7 meeting in Washington. They rejected the idea; Russia was expelled from the club of elite nations after Putin’s 2014 annexation of Crimea, part of Ukraine.

Trump has no such qualms with China, a clear bogeyman of his reelection campaign. Trump has been consistently critical of China, even retaliating against what he calls unfair trade practices with his own trade war.

Though tough on the U.S. economy, this stance has some bipartisan approval in Washington and among U.S. allies. China’s refusal to stop subsidizing many state-owned enterprises, grant greater market access to foreign firms and protect intellectual property rights are issues of great global concern, as is its increasingly assertive foreign policy. Still, many U.S. China experts believe Trump’s crude rhetorical attacks are unhelpful for finding a constructive way forward.

Even the administration’s most initially promising diplomatic initiatives – engaging North Korea, ending the war in Afghanistan and seeking to normalize Israel’s relationships with some of its Arab neighbors – have not resolved these chronic international crises.

Back in 2016, “America First” seemed to promise a clear defense of U.S. primacy in a changing world order. That appealed to many voters.

Today, the U.S. has all but abdicated its position as the world’s most globally engaged power. China and Russia are busily working to fill the vacuum.