What Does NATO Have To Do With a Dispute Over Church Property In Montenegro? 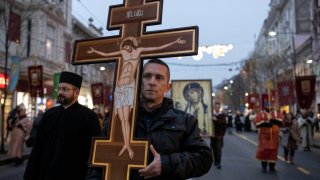 Here's What You Need To Remember: The fight over Serbian Orthodox Church property is as much about national identity as it is about theology.

Historians of the First World War saw the Balkans as “the powder keg of Europe,” and for good reason. Not only did the region provide the spark that ignited the first truly global conflagration of the last century, it is also home to latent ethnic and religious cleavages that have historically threatened security and stability on the rest of the continent. Crucially, these cleavages also create an avenue for outside interference—an opening that, over the years, has often been exploited by Russia.

It is this property, in particular, that lies at the center of the current dispute roiling the Balkans. Despite fierce opposition from both the Serbian government and ethnic Serbs living in Montenegro—who make up nearly 30 percent of the population—Montenegrin president Milo Djukanovic signed a controversial religious freedom law back in December that allows the state to nationalize Serbian churches and other holy sites if they can’t provide proof of property ownership prior to 1918.

The law has understandably sparked protests throughout the region. On January 8, Serbian Orthodox priests led a procession of tens of thousands to St. Sava Church in Belgrade to mark the date the law came into effect, while ethnic Serbs in Kosovo and other parts of the region held similar demonstrations.

Yet, at bottom, the controversy is much more political than it is religious. Some hope that the law marks the first step in eventual Montenegrin government backing for “autocephaly,” or ecclesiastical independence, for the country’s currently-unrecognized Montenegrin Orthodox Church. Djukanovic himself has hinted at such a move, intimating in a February interview that Montenegro needed its own Church in order to solidify its national identity.

These rumblings, however, come against the backdrop over the Ukrainian Orthodox Church’s recent—and controversial—declaration of independence from Moscow. The Ecumenical Patriarch of Constantinople, considered the “first among equals” in the Orthodox world, granted the new Orthodox Church of Ukraine the tomos—signifying autocephaly—in January of 2019. The decision led the Moscow Patriarchate, which previously enjoyed jurisdiction over Ukraine, to break communion with Constantinople. Fearing a further schism in the Orthodox community, the Ecumenical Patriarch may choose to deny Montenegrin requests for autocephaly, at least for the time being.

Further linking the situation in Montenegro to Ukraine, Metropolitan Onufriy, the head of the portion of the Ukrainian Church still under the control of Moscow, attended protests in Podgorica, the Montenegrin capital. The move prompted Djukanovic to criticize Moscow’s interference and claim that “Moscow was unequivocal in stating its interests in the ongoing problem in Montenegro.”

Indeed, the dispute over the future of Orthodoxy in Montenegro is intertwined with Montenegro’s attempts to formulate closer ties with the West, something that has generated fierce opposition from Russia. On the eve of Montenegro’s 2017 accession to NATO, the Montenegrin government uncovered an alleged Russian plot to assassinate Djukanovic ahead of the October 2016 Montenegrin election, although the Kremlin has denied any involvement in the alleged coup. Montenegro is also in advanced negotiations with the European Union, seeking to further tie its future to the West and escape Russian influence.

Serbia, though also a candidate for EU membership, continues to enjoy a close relationship with Russia, including extensive military cooperation. Additionally, the Serbian Orthodox Church maintains close ties with the Russian Church. Utilizing this historical relationship, the dispute over the religious freedom law permits Russia to disrupt European integration efforts as well as to extend Moscow’s religious and political influence in the Balkans.

While the current dispute over the religious freedom law is being framed in religious terms, it is impossible to ignore the power dynamics at play. Djukanovic’s efforts to solidify a Montenegrin national identity may result in an independent church there at Serbia’s expense. Beyond national identity, though, one cannot view the dispute outside the context of Russia’s efforts to maintain influence in the Balkans, and to do so at the expense of the European Union.

Montenegro may never fully free itself from Russian and Serbian influence. But membership in NATO, coupled with future accession to the EU, will provide a bulwark against foreign efforts to interfere in Montenegrin affairs. The country’s religious identity is thus much more than a battle for influence. It represents a microcosm of the struggle for the soul of this Adriatic state.

Nicholas Labecki is a researcher at the American Foreign Policy Council in Washington, DC.