This Is What a Dogfighting Helicopter Looks Like (Kind Of) 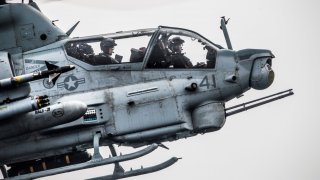 Here's What You Need to Remember: The U.S. Marine Corps’s AH-1Z Viper attack helicopter possesses a little-known capability. In addition to attacking ground and sea targets, they’re capable of fighting other helicopters—and, in a pinch, even fixed-wing warplanes.

David Axe served as a defense editor for the National Interest. He is the author of the graphic novels  War Fix, War Is Boring and Machete Squad.