What is Donald Trump Jr's Net Worth? 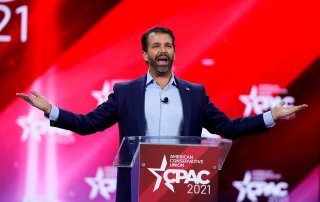 Donald Trump, Jr., during the presidency of his father, emerged as something of a conservative celebrity, frequently appearing as a campaign surrogate for his father, while also writing multiple books. Sometimes joined by his partner, the former Fox News host Kimberly Guilfoyle, Trump Jr. is also frequently hired as a public speaker.

How much money has the younger Trump made?

According to Celebrity Net Worth, Trump Jr.’s net worth is somewhere in the neighborhood of $300 million. Per the site, the younger Trump is an Executive Vice President of the Trump Organization, and while he doesn’t hold an ownership stake in the company, although he does own 7.5 percent of the Trump International Hotel in Washington. The younger Trump also has personal real estate holdings, including a New York apartment and a hunting preserve that owns along with his brother.

Trump wrote a book in 2019 called “Triggered: How the Left Thrives on Hate and Wants to Silence Us,” and another in 2020 called “Liberal Privilege,” which was self-published. Per HuffPost, the Republican National Committee spent $300,000 on donor money to purchase copies of the 2020 book, after the RNC had done the same, to the tune of $95,000, for the previous book. Celebrity Net Worth stated that the “Triggered” book “was purchased in bulk by at least nine Republican organizations.”

Measurements from Celebrity Net Worth and sites like it are always inexact. And because the younger Trump, unlike his sister Ivanka and brother-in-law Jared Kushner, never was employed by the government during his father’s presidency, he was not required to submit the types of disclosures that his sister and brother-in-law did.

As for Don Jr.’s father, his net worth has been measured at various figures over the years.

Donald Trump's worth has been estimated at different amounts by a few different sources, over time. Forbes once listed Donald Trump’s net worth at $2.4 billion, the Bloomberg Billionaires Index lists his fortune at $2.3 billion and Celebrity Net Worth had it at $2 billion.

It’s generally believed that Trump probably lost money from his net worth over the course of his presidency, both because his real estate holdings were hurt by the pandemic, and because his becoming a more controversial figure has caused him to lose business opportunities. The former president, famously, never released his tax returns, although his tax documents surfaced in the press on a few occasions, and Manhattan District Attorney, Cyrus Vance, Jr., following a battle that went all the way to the Supreme Court, succeeded in obtaining the ex-president’s tax records, as part of an investigation that’s now before a grand jury.