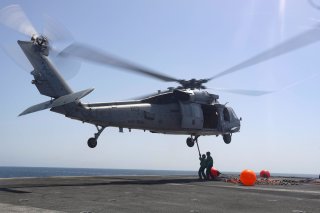 Here's What You Need To Remember: "Battle Force 2045" is an ambitious plan to expand the Navy's fighting force in the next twenty-five years. It will certainly be expensive - but America will be better-defended for it.

After a flurry of tantalizing but incomplete public announcements throughout October, the much-delayed future force plan for the U.S. Navy known as Battle Force 2045 is no longer missing in action. Its prolonged absence, though, will not be without consequence.

In the meantime, as maritime competition with China and Russia sharpens and COVID-19 costs drag on the economy, some have begun calling to cut defense by as much as 10 percent. Such cuts are ill-advised, given the Army and Marine Corps are still shifting from 20 years of counter-insurgency operations in Iraq and Afghanistan, and the Navy will need years to recover its fleet’s readiness after prolonged overwork and under-resourcing.

Without Battle Force 2045’s shipbuilding plan — formally known as the Future Naval Force Study (FNFS) — Congress had no guide to prioritize nor judge its budgetary decisions weighed against building the Navy the nation needs in the current budget proposal — NDAA 2021.

That said, before making major defense budget shifts, better — as former Deputy Assistant Secretary of Defense Elbridge Colby recently argued — to first decide what the nation needs the Navy to achieve. FNFS hints that this was done, and is included in a forthcoming Tri-Service Maritime Strategy. That said, since at least 2015 there has been consensus, reflected in the widely accepted 2018 National Defense Strategy, that our military must compete in peacetime, deter aggression, and win in war.

Sadly, just articulating that mission statement isn’t enough to guide our nation’s investments. More precise priorities are needed. Strategy must lead in deciding what if any cuts or additions to defense are made, and the general premise of the 2018 National Defense Strategy will likely remain that guide. In the meantime, as the former Comptroller for the Department of Defense Elaine McCusker notes, a healthy national budget debate would consider defense spending in the wider context of the complete federal budget, of which defense accounts for roughly 15 percent of the total.

Let’s hope the forthcoming Tri-Service Maritime Strategy provides the framework for the Navy’s FNFS and associated shipbuilding plan, while addressing the following:

To contest the Chinese and Russian theories of victory, the Navy must be integrated with all levers of national power in an orchestrated effort. Effective diplomacy and strategy requires the backing of a military capable of winning wars and securing the peace. For China, it is a competition playing out largely in the maritime domain. And to design a war-winning military requires a galvanizing construct.

For decades, the decisive battle with the Soviet Union was thought to be on Europe’s plains at the Fulda Gap, and preparing for that fight animated Cold War defense decisions. Today’s military investments, especially for the Navy, will likewise look to building the forces needed to fight and win a war in the South and East China Seas.

Yet this will not be all the Navy is called on to do to contest Chinese and Russian actions below the threshold of conflict.

While enticing to cut defense, unlike the end of the Cold War, great power challenges today foreclose any new peace dividend to balance the nation’s ledgers. And, unlike Reagan’s naval build-up of the 1980s — where, for example, four battleships were reactivated to rapidly enlarge the fleet — today there is no latent warship or commercial capacity to tap; the Navy's inactive fleet of reserve ships have been depleted.

Lawmakers who think they can use defense cuts to fund new entitlements or pay down debt are fooling themselves. At only a fraction of the total federal budget, defense simply can’t deliver what they seek.

It is remarkable that such calls even occur, given the documented and striking challenges of China’s decades-long military modernization and expansion. For 20 years, the Department of Defense has diligently reported to Congress about the gradual erosion of our military’s edge. Lawmakers know full well that China today leads in several key capabilities: shipbuilding, air defenses, and ballistic and conventional missiles. Despite this yawning gap, the FNFS proposes only a 2 percent real growth in shipbuilding, operations, and sustainment over the next five years, after which funding drops precipitously. This will likely be counter-productive for a Navy that must still grow in numbers, expand maintenance capacities, and recapitalize antiquated infrastructure.

To our competitors, notably China and Russia, a turn inward to resource domestic entitlements is no different than an isolationist policy wrapped in comforting logic. Congress should resist an arrogance that presupposes continued U.S. influence without making commensurate investments in our military. The historical record has not been kind to nations that failed to invest adequately in security when confronting revisionist powers — notably 1925-1935 Britain and France against a revisionist Germany.

As the Office of Management and Budget for the last couple months reviewed the FNFS, little has been heard on what is driving the Navy’s force structure decisions and how a future fleet would complicate China’s and Russia’s theory of victory – winning without firing a shot. With this in mind, the Dec. 2 Senate Armed Services Committee hearing on Navy and Marine Corps readiness was a missed opportunity to provide valuable insights.

With the election behind us and the FNFS released, it is high time the Navy get on with its business and make its case for a fleet that can compete with China and Russia in peace and when called on win in war.

With this in mind, in building the Navy the nation needs, the first question should not be “what navy can we afford?” but rather “what navy do we need?” Battle Force 2045 is a part of that answer, and it should not forsake the success of over 70 years of overseas active defense centered on naval forces; which has kept our homeland secure. Amid rising challenges, a greater share of national treasure is required to safeguard our continued prosperity and liberties.

Brent D. Sadler is Senior Research Fellow for Naval Warfare and Advanced Technology in the Center for National Defense, of the Kathryn and Shelby Cullom Davis Institute for National Security and Foreign Policy, at The Heritage Foundation. This article first appeared in December 2020.