What Happens When a Sports Team Wants Taxpayers To Build Them a Stadium? 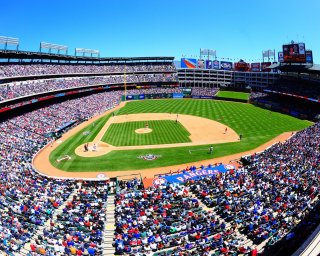 “Throw a Billion Dollars from the Helicopter.” That’s the title of a new documentary on taxpayer funding of professional sports stadiums, and also the advice of a University of Chicago economist on a better way to help local economies.

We’ve written a lot about the economics of stadiums here, so it’s great to see the topic getting more attention. The documentary is available on Vimeo and—starting today—on Amazon Prime.

In 1989 an investment group headed by George W. Bush acquired the Texas Rangers. They promptly asked the city of Arlington, Texas, to build them a new stadium. In January 1991 voters approved raising sales taxes to pay 71 percent of the cost of the stadium. The “public” agency overseeing the project also seized surrounding land by eminent domain to allow the team owners more room for development. All told, the taxpayers chipped in about $200 million for the wealthy team owners, and the new stadium opened in 1994. Bush and his partners made big money when they sold the team in 1998.

But sports teams always want to keep up with the Joneses. Within 20 years or so the new owners wanted a newer, fancier stadium complete with a retractable roof. So they teamed up again with the mayor and city council and arranged for — this time — a $500 million bond deal. Civic leaders were all on board. A scrappy group of Tea Party‐​type residents calling themselves Citizens for a Better Arlington tried to stop the deal, but they were outspent 50–1 and often thrown out of public events and bullied by the mayor. In the end about 60 percent of the voters once again approved being taxed to help megawealthy investors build a stadium along with bars, restaurants, a hotel and other associated money‐​making enterprises. The proponents spent about $2 million on their campaign. Even in oil‐​rich Texas, you couldn’t find an investment with a better payoff.

The documentary has footage of the mayor and the council meetings and interviews with Arlington residents on both sides of the dispute. It also interviews leading sports economists such as Roger Noll of Stanford, Rod Fort of the University of Michigan, and Allan Sanderson of the University of Chicago—the one who said that if you want to generate economic development in a city you’d do better to just take the money, convert it into $20 bills, get a helicopter, and then throw “a billion dollars from the helicopter” down on the city. About 35 minutes in is a useful chart showing how much more expensive stadiums have gotten over the years (adjusted for inflation).

Special treat for Cato at Liberty readers: Near the end of the documentary a young man campaigning for the corporate welfare describes himself as really mostly a libertarian.

More on the economics of taxpayer‐​funded stadiums here and here.

This article by David Boaz first appeared in CATO on July 8, 2020.