What-If Nuclear War? This Is How America Could Wage War On Pakistan 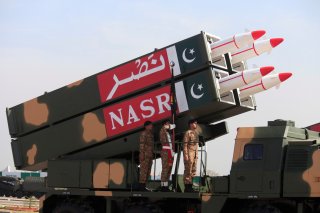 In the U.S. television series Homeland, the United States and Pakistan are brought to the brink of war. In real life, the two countries are allies, albeit strained ones at that, and many Americans believe Islamabad often actively works against Washington’s interests. If the relationship turned poisonous, how would the United States prosecute a war against Pakistan?

In order to proceed, let’s sketch out two war scenarios. In one, we’ll assume that the United States is pursuing an air-only campaign, in order to punish the country or strip it of some vital capability—nuclear weapons being a prime example. In the second scenario, the United States seeks to topple the country’s government entirely, including the occupation of the capital, Islamabad.

A prolonged U.S. air campaign would be a difficult proposition. Unlike past campaigns against Iraq, Somalia, Yemen, and Afghanistan, Washington would find regional allies who could provide air bases a difficult proposition. Pakistan enjoys warm relations with most of the Sunni states, particularly the United Arab Emirates and Qatar, both of whom have air bases capable of hosting U.S. tactical aircraft, as well as Saudi Arabia and Oman.

A U.S. air campaign directed against Pakistan would largely consist of bomber, carrier, and cruise missiles strikes. Strategic bombers, including the B-1, B-2, and B-52 would conduct strikes from the continental United States and the American base on Diego Garcia in the Indian Ocean. Only these aircraft have the range to strike targets in Pakistan from friendly bases. Depending on the level of international support, long-range bombers could also launch from the United Kingdom, including RAF Fairford, improving sortie rates.

The U.S. Navy would play a major role. U.S. forces would neutralize the relatively weak Pakistani Navy. While the Pakistani Navy operates about one hundred ships, it has only a handful of surface combatants of frigate size or larger, and just five aging diesel-electric submarines. Once these are neutralized the U.S. Navy could bring its aircraft carriers closer to the coastline, conducting airstrikes against military targets. Surface warships and nuclear-powered attack submarines would contribute by launching swarms of Tomahawk land-attack cruise missiles against highly defended targets.

An air campaign against Pakistan would be slower and more fraught with difficulty than past campaigns. Pakistan’s Air Force has nearly four hundred fighters, including American F-16 Fighting Falcons, and would need to be quickly destroyed. U.S. Navy and Air Force aircraft could see their first significant air to air combat since the 1991 Persian Gulf War.

An all-out invasion of Pakistan would be much more difficult, bordering on impractical. An invasion would require securing the city of Karachi, a coastal city of 14 million, then a march upcountry of approximately 700 miles. Securing Karachi alone would be an immense effort dwarfing efforts to secure Baghdad in the late 2000s, one that required more than 100,000 U.S. troops and the cooperation of local militias.

The Pakistani Army consists of nearly 800,000 active-duty personnel, with significant reserves totaling more than a half-million. Much if not most of this force is arrayed against the border with India, but the U.S. invasion route would actually pass through many of Pakistan’s forward-deployed forces. While U.S. forces would be qualitatively superior, it would be a grinding fight that could be interrupted at any time by Pakistani nuclear weapons.

Of course, there is one regional power that can provide everything the U.S. needs, including local air bases and a large army, navy, and air force, already positioned in the theater with well-sketched battle plans: India. India could help with an air campaign, providing runways for U.S. fighter bombers to operate from, or even contribute its own airpower. Indian ground forces have a far shorter route to Islamabad and overmatch Pakistani forces on the ground.

Another power that could join such a conflict is China. China and Pakistan enjoy warm relations, and the rhetoric between the two countries suggests a relationship nearing that of a mutual defense pact. But it isn’t, and it’s not clear that China would risk direct conflict with the United States if Pakistan in some way overreached. China might, on the assumption that a U.S. puppet state in neighboring Pakistan would diminish China’s power and influence abroad. It’s worth remembering that the last time Chinese forces fought Americans was after the U.S.-led United Nations forces advanced into a state neighboring Beijing.

A U.S. war with Pakistan would be extremely difficult to wage and fraught with difficulty. It would also be forced to proceed under the assumption that some Pakistani nuclear weapons would survive a sustained effort to destroy them, to be used against U.S. forces or targets in some way later in the campaign. This is the sort of uncertainty that can veto military action and makes a war between Washington and Islamabad an absolute conflict of last resort.

Kyle Mizokami is a defense and national security writer based in San Francisco who has appeared in the Diplomat, Foreign Policy, War is Boring and the Daily Beast. In 2009 he cofounded the defense and security blog Japan Security Watch. You can follow him on Twitter: @KyleMizokami. This article first appeared in April and is being republished due to reader interest.