What if Russia Had Won the Space Race? 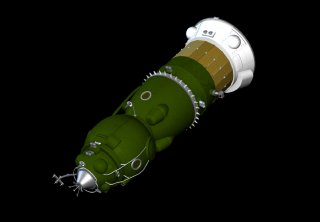 What if the Soviet Union had landed on the moon first, and America lost the space race? Would America’s reaction have been one of defeat, or of reinvigoration? If we had lost the moon, might we have redoubled our efforts to explore space, unlocking untold possibilities for humanity? That is the premise of a new show on Apple TV+ called “For All Mankind,” created by the renowned science fiction screenwriter and television producer Ronald D. Moore, who I am delighted to be speaking with today.

Ron has worked on a wide variety of TV shows over the past few decades, including “Star Trek: The Next Generation,” “Deep Space Nine,” and “Voyager.” He is also the creator of “Outlander” and, of course, he is the co-creator of 2004’s “Battlestar Galactica.”

What follows is a lightly edited transcript of our conversation, including brief portions that were cut from the original podcast.

Pethokoukis: “I take this step for my country, for my people, and for the Marxist-Leninist way of life, knowing that today is but one small step on a journey that someday will take us all to the stars.” These words are spoken in Russian in season one, episode one of “For All Mankind” by the first human to walk on the moon in that alt-reality, cosmonaut Alexei Leonov. In this reality, Leonov was the first human to walk in space and would’ve been the first human on the moon had the Soviets gotten there first.

The idea that the Soviet Union won the space race sounds like a great idea for a dystopian drama. And as an aside, Ron, I’ll say that that scene evoked a huge emotional reaction out of me, seeing the Soviet on the moon, talk about Marxist-Leninism. But it’s a very aspirational show in terms of space exploration and social progress. So what inspired you to go in that direction with the show?

Moore: This goes to the roots of how the show came about. Zack Van Amburg, an executive at Sony Studios for years, and I talked some time in the distant past about doing a show set at NASA in the Skylab era. Nothing ever happened about it. Then flash forward to when Zack took over the reins as one of the co-chairs at Apple TV+. He calls me up and says, “I still think about that show we talked about doing — the show at NASA in the ’70s. What if we did it? What if we did a Mad Men-style show at NASA in the ’70s?” I got excited about it, “Oh, that’s really cool,” because I was a big space buff.

But the more I thought about it, the more I realized that while you could do that as a character piece with NASA in the background, the story of the space program of those years, in my opinion, was kind of a depressing one. It was about budgets getting cut back, the horizon getting closer and closer. The big ambitions about having moon bases and more space stations and going to Mars all just kind of went away.

The show I wanted to do was the space program that we didn’t get. The one that I was promised growing up as a kid, where we did all those things, the Apollo kept going, the space race continued, and we went out into space and beyond more aggressively and with greater ambition.

So then it became, “All right, how could that have happened? Why would that have happened?” As I thought about it, it became clear, at least to me, that one of the ways it could’ve happened was if the Soviets had beaten us to the moon. Instead of us getting to the moon and saying, “Yay, us, USA, USA, we did it! Okay, now let’s just pack our bags and go home” — if we’d been beaten at the last minute by our arch-rival, it would’ve spurred us and pissed us off and made us redouble our efforts. As if to say, “Now we’re really going to the moon, and now we’re going to do all these other things because we’re so angry and so upset about getting beaten at the last minute.”

It was always sort of meant to be an aspirational show because I just wanted to play that story of what I thought the space program was going to be and what it could’ve been, and then it was a question of, well, how could we get there? That’s how the Soviets beating us came up.

To me, taking it that direction is not intuitive. Certainly, you can imagine everything else that seemed to be going wrong. In the late ’60s, there was a lot of unrest. You had Vietnam. The economy was beginning to turn. And in your alt-reality, then we lose the space race, too. It may not have been very good television, but, certainly, for me, the natural version would’ve been just been America concluding that we can really do absolutely nothing right, and sinking into more malaise and a deeper pessimism.

Yeah, absolutely, you certainly could tell that story. I just didn’t want to tell that story. In terms of science fiction, my roots go back to growing up as a fan of the original “Star Trek” series in the ’70s when it was in strict syndication. The ideals, the optimism, and the aspirational quality of that show really spoke to me and formed me in a profound way. I got fortunate enough as an adult to actually work on “Star Trek,” which was an amazing dream come true for me. But the idea of what space stood for to me as a child which I had a chance to then revisit in “For All Mankind” — that’s absolutely the direction I wanted to go.

I wasn’t really interested in doing a dystopian piece or showing how it all just could’ve gotten even more profoundly worse and bad as a result of the Soviets getting us there. I guess I have a certain optimistic, idealistic faith in us that, faced with a challenge like that, that we would’ve stepped up and not just run away and gone, “Oh my god, they beat us, and now let’s just really sit and suck our thumbs and be upset.” I have a hope that it would’ve propelled us onto greater things and would’ve pushed us out into the cosmos.

Is this a show NASA is helpful with?

They’re not. We approached them early on, because a former astronaut is one of our science consultants on the show, and we have various contacts with them. Their attitude has been, “We like it, but we can’t officially support it,” because essentially they’ve taken so much heat over the years and have spent so much time having to swat down this preposterous thing that the moon landing was faked. So now, they basically have a policy that says, “If you’re doing something historical and it involves NASA, it has to be absolutely true.” They don’t want to support anything that has a fictionalized quality or an alternate-reality quality of the space program, even though ours is a very positive view of NASA, obviously. It’s very supportive of it and tries to be as accurate as possible. So they just kind of said, “We’re with you in spirit, but we’re not going to give you the official support.” If you look closely, you’ll see that our NASA logo has been slightly altered.

Yeah, if you look at the meatball NASA logo, you’ll see that the red V goes in the other direction.

Amazing. One of the characters on this show — because I fairly recently had read a biography and especially his involvement with Disney over the years — was Wernher von Braun, who is played in the show by Colm Feore, who is president of the 12 colonies, Battlestar fans may remember. What is your take on Wernher von Braun, someone who was controversial because of the V-2 rockets and World War II and so forth?

Yeah, it’s interesting. That aspect really came from my partnership with Matt and Ben, who co-created the show with me. They had already done research on Wernher von Braun and were interested in him as a historical figure, and they got deep into Operation Paperclip. I didn’t really know that much about that before we got into the project. I had to personally struggle with my own childhood… hero-worship is too strong a word, but I certainly thought he was one of the program’s heroes and looked up to him. I tried to dismiss the “Well, you know, he was a German, and, sure, he fought for Germany, but it was a war, and these things happen.” So I hadn’t really gotten into the nitty-gritty of the evidence of what had piled up and what he probably knew.

What came to us, or what was shown to me as we went through it, is that there was no smoking gun. There was no absolute proof that he knew what was going on in the camp that was supporting his missile facility. But it’s hard to imagine he didn’t know. So what we did is we tried to play as close to the truth as we could in the show, where the photographs were real, and the evidence that was cited in the show was real. Even his response to it was drawn and inspired by things he actually said during his Army interrogations when he was asked about these things — why he was in the SS, and that, yes, he went to the rocket factory periodically, and he didn’t know. So we tried to just present what seems to be the historical fact of it and let the audience draw their own conclusions.