What if Soldiers Were As Stealthy as the F-35? 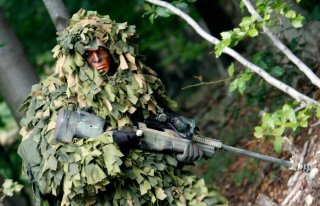 Here's What You Need To Remember: Stealth materials already exist but have been unavailable to the lowly foot soldier. That's no longer the case.

First, there were stealth fighters that didn’t show up on radar. Now the U.S. Army wants uniforms that allow ground troops to escape the notice of electromagnetic eyes.

Stealth materials already exist but have been unavailable to the lowly foot soldier. "While there exists a wide variety of radar absorbing material (RAM) composites for shelters and vehicles, there are currently no effective and lightweight wearable options to mitigate GSR detection of a dismounted soldier," the Army notes.

Michael Peck is a contributing writer for the National Interest. He can be found on Twitter and Facebook. This piece was originally featured in May 2018 and is being republished due to readers' interest.