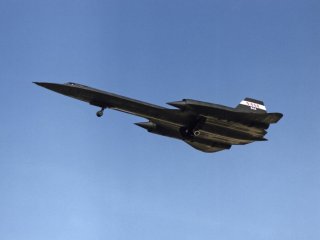 Here’s What You Need to Remember: The principal factor was cost.

The SR-71 Blackbird remains one of the most legendary aircraft of all time. Over the span of its five-decade service, it ran thousands of missions over sensitive areas, outrunning thousands of missiles launched at it—the majority of those from the Soviet Union—and setting the record for the fastest plane ever to fly.

What eventually came to kill the SR-71, though, was not a better plane, but a combination of technological advances, budget cuts, and a reorientation of U.S. strategy away from supersonic spy missions.

The principal factor, however, was cost. In spite of the plane’s unparalleled service record, it was simply too expensive for the U.S. Air Force to continue to run after the end of the Cold War. Air Force officials were frank about this fact in 1989 hearings. As reported by the Los Angeles Times:

Air Force Chief of Staff Gen. Larry D. Welch identified [in Congressional testimony] the increased survivability of reconnaissance satellites, SR-71 vulnerability to the Soviet SAM-5 surface-to-air missile and the cost of maintaining the SR-71 fleet. The cost factor is the most significant to the Air Force because it limits expenditures in other areas. Reagan Administration Air Force Secretary Edward C. Aldridge Jr. estimated that the money used to operate the SR-71 fleet could operate and maintain two tactical fighter wings.

A second factor that Welch cited concerning advances in then-Soviet ground-to-air missile technology, most prominently Moscow’s new S-300 missile defense system (known by NATO as the SA-10 Grumble). New aircraft, including the MiG-31 Foxhound, also played a role in the Air Force’s decision to quit while they were ahead.

Even as Soviet and subsequently Russian missile technology improved, other U.S. technologies improved alongside it—mainly spy satellites, which could take pictures of sensitive areas without any danger from anti-air missiles, and, when such missions were still needed, the emergence of unmanned aerial vehicles, or Unmanned Aerial Vehicles (UAVs). These drones, including the Lockheed Martin RQ-170 and the Northrop Grumman RQ-180, played important roles in the War on Terror in Afghanistan, as well as duties in South Korea and elsewhere.

Military drones were never an exact successor to the SR-71 and the precise role it played in the Air Force’s operations, though narrowed by spy satellites, remains unfilled. A successor aircraft, the SR-72 “Darkstar,” might be able to plug the gap, but it remains unclear when, if ever, it will first take off.