What Makes German Type 212 and 214 Submarines so Popular? 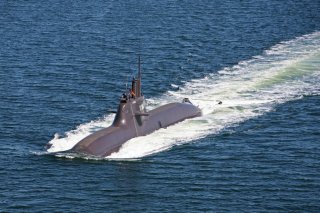 Here's What You Need To Remember: The German Type 212 and 214 fuel-cell boats are at least as stealthy as their nuclear-powered cousins, if not more so, and each individual torpedo carried can be just as deadly. Considering that multiple boats like the Type 212 or 214 can be built for the price of a single nuclear attack submarine, the firepower advantage of the larger submarines is not so clear-cut.

During World War I and II, submarines were at their most vulnerable when their noisy, air-breathing diesel engines forced them surface to recharge batteries, exposing the boats to detection and attack. The Kriesgmarine built several experimental Type XVIIB submarines with an Air Independent Propulsion (AIP) system, using hydrogen peroxide fuel that theoretically enabled extended underwater endurance. In practice, the boats were considered dangerously unsafe and unreliable. Although the United Kingdom, Soviet Union, and the United States all experimented with AIP submarines after the war, development was abandoned in favor of higher-performing nuclear-powered submarines.

Shipyards across the world have also license-produced more than a dozen German Type 214 export submarines, fuel-cell-powered successors to the popular Type 209 submarine, one of which saw action in the Falkland War under the Argentine flag. The sixty-five-meter-long Type 214 lacks the 212’s nonmagnetic hull, and some sources maintain its systems are downgraded. However, the export submarine has a longer range and a greater diving depth of four hundred meters, to accommodate waters beyond the Baltic, and its eight torpedo tubes are capable of launching Harpoon antiship missiles while submerged.

German shipbuilders have recently offered larger, longer-range versions of the 212/214 submarines, the Type 216 and 218. The Type 216 was intended for sale to the Royal Australian Navy, but was passed over in favor of the French Shortfin Barracuda. However, two Type 218SGs are under construction for Singapore and will be completed in 2020. Details are sketchy, but the seventy-meter-long “ocean-going” submarines will retain a small crew of twenty-eight and an X-shaped rudder. They are believed to have Horizontal Multi-Purpose Locks, which can be used to launch either torpedoes or divers, and also cruise-missile launch capabilities.

Admittedly, all of the small German submarines may seem to have unimpressive speed, endurance, and weapons loads, compared to larger nuclear-powered American and Russian submarines, which can sustain well over twenty-five miles per hour submerged for three months while carrying dozens of weapons.

This article first appeared in January 2017 and is being republished due to reader's interest.