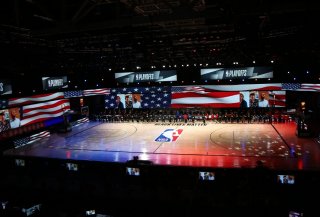 That’s what I said after the nerve-wracking Game 6 of the NBA Eastern Conference Playoff Series between the Toronto Raptors and Boston Celtics that I watched with socially distanced fans at a drive-in parking lot in Toronto.

The Raptors’ 125-122 win at the end of two (two!) overtime periods was an instant classic.

From within our respective cars, the shared excitement felt a lot like being back in Scotiabank Arena. Of course, I didn’t see the game “live.” But for a brief moment there was a palpable feeling of “we” back in “We the North.”

It’s been six months since COVID-19 emerged in North America, causing theatres to close. In the United States, Dr. Anthony Fauci, the now-familiar director of the U.S. National Institute of Allergy and Infectious Diseases, recently predicted that theatres may remain closed until a year after a vaccine is discovered. Artists and arts organizations are asking: What is the future of live performance? The NBA’s #WholeNewGame may provide important lessons for performing artists and their organizations.

Sports: Much in common with the arts

Decades of researching performance — and watching basketball — have taught me how much sports have in common with the arts: dedicated showings (game times), specific costumes (uniforms) and established conventions for both performer and audience behaviours.

One can point to any number of rivalries to see how professional sports blurs into drama. (As Raptor Norman Powell and Celtic Marcus Smart shouted at one another at the end of Game 6, an announcer remarked, “This is great theatre!”).

Beyond sports fans, arts and entertainment enthusiasts miss attending public performances and wonder how they will evolve. As someone who enjoys both basketball and theatre, I’ve watched carefully as the NBA re-opened its season.

Fans like me have followed with some degree of awe and fascination the details of the NBA bubble — a zone for 22 teams on a campus at the Walt Disney World Resort near Orlando, Fla..

The achievements of the enterprise became evident as the playoff games got underway. The bubble games blended theatre and sports to create a hybrid performance space that offered a great “live” experience while protecting performers and audiences. Curtains and video screens masked empty seats in the auditorium. Digital logos and ads, lighting effects on the court and amplified soundtracks with music, sound effects and fan noises mimicked the feel of live games both for the players and those watching at home.

The league also created “virtual fans,” people who could log onto a designated site and appear as a composite “crowd” on the courtside screens.

Due to the NBA’s excellent stagecraft, bubble games have felt a lot like watching games before COVID-19 closed arenas. Here are four lessons the arts can take away from the basketball bubble.

1. The future is hybrid

The NBA used theatricality to replicate the essence of a live game — fans cheering, sound effects, music — and gave viewers the opportunity to be visible to both the players and to themselves in the live performance space. As performing arts venues make decisions about the future, creating hybrid events that include virtual presence and audience recognition will be important for developing investment in their work.

What Brecht and Kane envied among sports audiences wasn’t just their enthusiasm, but their deep and often emotional investment in the stakes of the game as something bigger and more important than the game itself. The NBA players became involved with the Black Lives Matter movement and used their games as a platform for social justice.

This engagement was as integral to the sense of audience investment as the digital tools. How artists, like professional athletes, communicate the stakes of their work to dispersed audiences and give them meaningful opportunities to shape hybrid performance and its larger impact will be crucial.

As sports photographers know, the essence of any basketball game is movement. Memorable moments are replayed from many angles, circulating now on both TVs and mobile phones.

Creating both diverse social media perspectives and dynamic visuals is part of the successful formula. International companies like the United Kingdom’s Blast Theory have been experimenting with mobile device performances for over 20 years.

Live arts will need to innovate not only by using current social media platforms, but also by building novel and distinctive ones that capture the aesthetic and social dimensions of performances in motion.

The pleasure of the drive-in game — like drive-in movie theatres across Canada — isn’t about seeing the game on a larger screen, it’s about experiencing the game as part of an energetic, focused and horn-honking crowd.

Many speculate about when audiences will return to theatres, but both theatregoers and sports fans know the difference between sitting in a packed arena and an empty house. Even in a neighbourhood sports bar, the shared experience of a televised game can be worth the cost of over-priced beer. Theatres of the future will similarly facilitate audience connections with each other before and after the live event.

It’s likely that health and safety will remain challenges for live sports and the performing arts for years. But whereas a basketball game requires 10 people on the court, artistic performances can be staged in many ways: from one-person shows to art installations across borders to performers separated by Plexiglas partitions.

Theatre, dance and music can do more than just adapt to current constraints; they can create new productions that rewrite the rules. The NBA has successfully learned how to put on a great digital show. Now, theatres can learn from this success to enhance and sustain the future of the performing arts.

Sarah Bay-Cheng, Dean of the School of the Arts, Media, Performance & Design and Professor of Theatre and Performance Studies, York University, Canada