What the Pandemic Means for Emerging Market Economies and their Debt 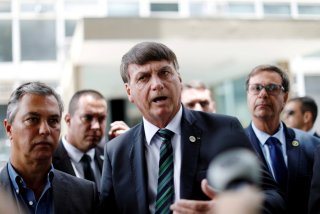 In the wake of the COVID-19 pandemic, governments in emerging market economies (EMEs) ratcheted up their spending and borrowing, leading to the sharp increases in debt shown in Figure 1 below. This rise in debt poses concerns that these economies may be headed for default and crisis. However, the decline in interest rates since the pandemic began should make it easier to service their debt. Therefore, aside from several economies with weak positions — especially Brazil and South Africa — serious fiscal problems do not appear imminent.

Let me start with the well-known relationship used to assess the sustainability of a country’s debt: the change in debt is a function of r minus g (that is, the real interest rate minus the GDP growth rate), the stock of debt, and the primary deficit.[2]

Below, I’ve provided a simple example applied to the United States. The 10-year Treasury yield has fallen from 1.6 percent right before the pandemic to only about 1.2 percent at present. That is a very slightly larger decline, in proportional terms, than the projected rise in the US federal debt held by the public — from 79 percent of GDP in 2019 to 102 percent this year. (CBO, The Budget and Economic Outlook: 2021 to 2031, February 2021) In consequence, if all the debt were paying the current 10-year yield, the interest service ratio would edge down to 1.22 percent this year.

To be sure, this calculation cuts many corners: Much of the debt was contracted earlier at rates that won’t automatically adjust down, and, moreover, yields won’t stay low forever. However, the example shows that as it rolls over its debt at lower rates, the US government can substantially offset the effect of higher debt on its interest service burden.

Figure 3 compares the change in dollar interest rates for individual countries between January 2020 (along the x-axis) and January 2021 (along the y-axis). Most countries — except the relatively vulnerable Brazil, South Africa, and Turkey — did enjoy substantial declines.

However, in addition to dollar debt, some or most of the debt issued by EM governments is in domestic currency. Figure 4 shows that domestic-currency rates also declined in most countries.

Let’s now turn to the debt side of the ledger. Based on IMF projections, sovereign debt looks to have increased substantially between 2019 and 2021 in all the major EMEs. (Figure 5)

To conclude, the recent rise in EME sovereign debt may pose substantial problems for several countries, especially Brazil and South Africa. But the decline in global interest rates should ease the burden for many other emerging market governments. Therefore, a broad-based emerging markets crisis does not seem the most likely scenario for the coming year. EMEs should continue to take advantage of low rates by refinancing as much of their debt as possible, and perhaps even borrowing more to build up a war chest for more difficult times ahead. Even if increases in EME debt are warranted by current low rates and ready funding availability at present, this could turn on a dime, and then the higher debts would represent a significant source of risk.