What Plane Could Have Replaced The F-14 Tomcat? 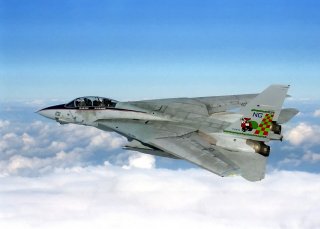 Here's What You Need To Remember: The Navy eventually worked out the problems with the F-14, and the Tomcat became a superlative air defense fighter. Eventually, it even gained a ground-attack mission. The temperamental nature of the design, the collapse of the Soviet Union, and the success of the Super Hornet made the Tomcat superfluous by the 2000s, however, and the Navy now lacks a long-range interceptor.

The F-14 grew out of the F-111 project, pushed by Secretary of Defense Robert McNamara as a fighter that could serve in both the Navy and the Air Force. USN and USAF needs differed, however; the Navy wanted for a long-range carrier-based interceptor came from concern over Soviet air-launched cruise missiles. Soviet bombers could strike American carrier battle groups from great distance, without entering the envelope either of ship-based SAMs, or short-range fighters. This disrupted the layered missile, interceptor, and gun systems that the Navy had developed for air defense since World War II.

Unfortunately, the F-111 did not work out; too many capabilities were pushed into the frame, resulting in a fighter too large for the Navy’s needs, and not particularly well-suited to the air-superiority mission. By the mid-1960s the Navy began work on an alternative project, which eventually became the F-14. The Tomcat contributed to solving the Soviet bomber problem by combining long range and high speed with the Phoenix missile, which could kill targets at extreme BVR.

But in its early years the Tomcat itself faced problems. The engines were temperamental, and the fighter was both heavy and costly. Design decisions, including swept-wings, made the Tomcat a complex beast to manage. Congress complained, comparing the performance of the Tomcat unfavorably with the Air Force’s new heavy fighter, the F-15 Eagle. With the general post-Vietnam drawdown in full swing, the Tomcat’s journey to operability was touch and go; a decision at several points could have ended the project.

One alternative would simply have been to retain the F-4 in its interceptor and air superiority roles. The Phantom was more than adequate for such missions, although it lacked the range and BVR capability of the Tomcat. Indeed, the F-4 remained in Navy service until the F/A-18 came online, in large part because of the need to populate the decks of USS Midway and USS Coral Sea. But of course the F-4 was not the Tomcat, and the balance of capabilities would have tilted in the direction of the big Soviet bomber formations, especially after the deployment of the Tu-22M “Backfire.”

In the early 1970s, as today, the Navy debated the future of the big carrier. Much like today, some argued that the ships were simply to expensive, wrapping up too much value into one vulnerable platform. After the order of USS Carl Vinson in 1974, the future of the big carrier was an open question. Had the Tomcat not offered a resolution to at least one of those threats (long range Soviet bombers) alternative arguments might have carried the day.

One option popular in the early 1970s, as the Essex class carriers were approaching the end of their useful service lives, was the “Sea Control Ship.” Light carriers dedicated to the anti-submarine mission, these fourteen-thousand-ton ships would have carried VSTOL fighters (such as the Harrier) and helicopters. Far cheaper than the big carriers, they offered a means of defending the trans-Atlantic corridor from Soviet submarines at a reasonable cost, and were probably too small to attract the attention of the Soviet bomber formations.

Another option involved retooling the surface fleet to take on some of the roles played by carriers. The nuclear strike cruiser project offered a large surface combatant bristling with missiles and carrying an early version of the Aegis combat system. This ship would have combined strike and air defense capabilities at lower cost than a carrier battle group, and would have been supported by additional Aegis-equipped cruisers and destroyers.

The Navy eventually worked out the problems with the F-14, and the Tomcat became a superlative air defense fighter. Eventually, it even gained a ground-attack mission. The temperamental nature of the design, the collapse of the Soviet Union, and the success of the Super Hornet made the Tomcat superfluous by the 2000s, however, and the Navy now lacks a long-range interceptor. The main threats to carrier battle groups no longer come from flights of bombers, but rather from ballistic missiles, and no fighter has yet demonstrated much promise at the ABM mission. Nevertheless, the Tomcat contributed a core defensive capability during one of the critical periods of the development of the super carrier.

Robert Farley , a frequent contributor to TNI, is author of The Battleship Book . He serves as a Senior Lecturer at the Patterson School of Diplomacy and International Commerce at the University of Kentucky. His work includes military doctrine, national security, and maritime affairs. He blogs at Lawyers, Guns and Money and Information Dissemination and The Diplomat. This article first appeared in 2018.