What Star Wars Can Teach Us About Military History 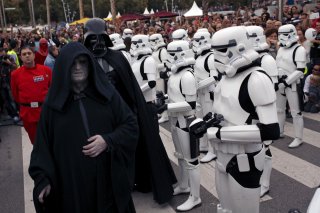 As an ardent Star Wars fan, I know what can come of voluntarily walking into the lion’s den of this fandom to offer any sort of commentary. Rest assured, I’m not going to challenge any well known canon (or dare mention the word midi-chlorian), but instead offer up some of the most interesting bits of Star Wars trivia, that are based more in fact than fiction.

George Lucas has never shied away from sharing the sources of inspiration that influenced the universe he created. In a 2005 interview, he told the Boston Globe:

“I love history, so while the psychological basis of ‘Star Wars’ is mythological, the political and social bases are historical.”

Star Wars, its heroes, and its villains were born from the likeness of Nazi Germany, Ancient Rome, the Vietnam War, the Knights Templar, and even U.S. Presidents. Lucas’s world reads as both commentary and cautionary tale, portraying what can happen when dark overpowers light.

One of the most formidable characters Lucas created, Sheev Palpatine’s origins as both emperor of the Galactic Empire and Darth Sidious, a Sith Dark Lord, were composed of a handful of leaders throughout history who perceivably aimed to dismantle democracy. Originally, the character of Palpatine was based predominantly on Ming the Merciless, the fictional tyrannical dictator and archenemy in the Flash Gordon series, both print and screen. In the book Skywalking: The Life and Films of George Lucas, author Dale Pollock details the influence Ming had not only on Palpatine, but on Darth Vader as well.

In fleshing out a more long term vision of Palpatine as the series took off, inspiration started to come from the real world. Borrowing from the behaviors of dictators like Hitler and Julius Caesar, it was easy to see the kind of manipulation and underhandedness the character was meant to embody. The trajectory of Palpatine’s rise to power, including abusing an elected position to change or control governmental bodies, is perhaps an only slightly more dramatized version of real history.

Even the use of the title “chancellor” (prior to his invoking martial law and declaring himself Emperor) was a nod to Adolf Hitler, who bore the same title in 1933 as a result of Nazi Party electoral victories. The Nazi’s also gave the inspiration for Stormtroopers, who share a name with German soldiers from WWI as well as WWII’s Sturmabteilung, or Storm Detachment, the Nazi Party’s paramilitary organization.

The historical allusions were also found in the cinematography. A notable scene is in Episode VI: Return of the Jedi, when Emperor Palpatine arrives at the Death Star and is met with an air parade of TIE fighters as well as stormtroopers, Army & Navy Troopers, officers and droids, all poised for the event within Hangar 272. The visuals in this scene were meant to resemble Russia’s May Day military parades.

One final name on the Palpatine vision board was the 37th President of the United States, Richard Nixon. Lucas started diving further into the character during Nixon’s re-election campaign, reflecting on the state of the world, and questioning how seemingly flawed but functional democracies can become dictatorships. At a story conference in 1981, Lucas was asked whether or not the Emperor was a Jedi, to which Lucas replied:

“No, he was a politician. Richard M. Nixon was his name. He subverted the Senate and finally took over and became an imperial guy and he was really evil. But he pretended to be a really nice guy.”

…not exactly the greatest way to have your legacy paid homage, but hey, at least you can say you were a muse to George Lucas.

Prior to setting his sights on Star Wars, Lucas was slated to direct the now critically acclaimed war movie Apocalypse Now, a job that ended up going to Francis Ford Coppola, following his successes with the first two Godfather movies. With the Vietnam War weighing heavily on most people’s minds, it easily seeped into both the obvious and subtle context of artistic expression, especially for those who purposefully wanted to send a message.

Love them or hate them, Lucas had a reason behind creating the polarizing, meter tall inhabitants of Endor. He wanted the juxtaposition of a group using less advanced means of fighting taking on the much more technologically adept force of the Empire. The Ewoks used primitive weapons and modes of transportation–knives, spears, hang gliders–and in terms of surviving in their natural environment, they thrived in ways the Empire’s technology was unable to adapt to. They were able to understand, respect and adapt to their terrain in a way that gave them the upper hand in a lot of ways. The defeat of the Galactic Empire was a direct comparison to the Viet Cong, who fought against American soldiers during Vietnam.

The Ewoks weren’t alone in their position of little fish in a big pond. Lucas applied the practices and techniques of both the Viet Cong as well as the People’s Army of Vietnam when thinking about the Rebel Alliance’s approach to combating the power of the Empire. He likened the Empire to the United States, a larger and more technologically advanced superpower, versus smaller groups.

“The irony is that, in both of those, the little guys won. The highly technical empire — the English Empire, the American Empire — lost. That was the whole point.”

A tale of two Empires: Neither Rome nor the Republic was built in a day

We’ve already mentioned the impact Julius Caesar had on the development of the character of Palpatine, so the leap of comparing the Star Wars Empire to that of Ancient Rome isn’t really all that far. They both began as republics, seemingly strong ones that theoretically should have been long standing parts of their development over time.

Both Caesar and Palpatine held onto their elected positions much longer than they were slated to, due to conflict and under the guise of “protecting their republic”

…which was really just an opportunity for them to gain more control and the ability to give themselves a job promotion that inevitably shifted both republics into dictatorships.

They also each had their own instances of entering into, or starting, conflicts with the reasoning of either expansion or supremacy. Rome had the Punic Wars, three separate conflicts between Rome and Carthage, who were the two major powers of the Western Mediterranean at the time. Star Wars had both the Old & New Sith Wars, as well as the Clone Wars.

The Clone Wars are probably the most integral to the recognition of the darkness it takes to overthrow a democracy, as they were masterminded and orchestrated by one person orchestrating both sides (Palpatine as Chancellor of the Republic, and Palpatine again, as Darth Sidious, at the head of the Separatists).

The Empire and Ancient Rome also share the similarity of being slowly brought down by much smaller factions, with the Roman Empire being met by force from the Huns and Germanic tribes, while the Rebel Alliance took on the Galactic Empire.

“The whole point of the movies, the underlying element that makes the movies work, is that you, whether you go backwards or forwards, you start out in a democracy, and democracy turns into a dictatorship, and then the rebels make it back into a democracy.”

George Lucas, in a 2006 interview with SciFi.com

The Jedi: Sharing the moral high ground with ancient warriors

Jedi are well known for being keepers of peace, guardians of justice within the Galactic Republic, and an overall force for good within the universe. Their ability to defend and protect, while also embodying the noblest of character traits is arguably what makes them the ultimate good guys (with Anakin being a divisive exception). They use the Force for good, are never self-serving, and remain committed to improving themselves through training and seeking greater knowledge.

“In a dark place we find ourselves, and a little more knowledge lights our way.”

Aesthetically, Lucas modeled the Jedi after both Shaolin monks and Japanese samurai, in the kinds of clothing they wore as well as drawing some inspiration for the Jedi fighting style and lightsabers from Katana fighting. The monk and samurai belief systems can also be seen mirrored throughout the Jedi timeline.

In the book Star Wars and History, author Terrance MacMullen puts forth another area of influence in creating the Jedi: the Knights Templar. Often referred to as “warrior monks”, the Templars were a Catholic military order, originally established in 1119 to protect Christian pilgrims in the dangerous “Outremer,” or Crusader states, following the First Crusade. Of all the warriors that built the idea of the Jedi, the most direct parallels can be drawn to the Templars.

Both Jedi and Templars went into battle fearlessly, regardless of being outnumbered or overpowered. It was this dedication to the cause, or rash invincibility complex, that distinguished them both as formidable opponents and examples of aggressive morality. This fearlessness was guided by invisible forces on both sides. For Jedi, it was quite literally the Force, while the Templars were driven by their faith.