What 'True Lies' Gets Wrong About the Harrier Fighter Jet 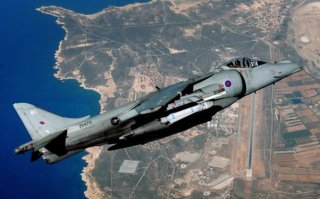 The 1994 movie “True Lies” is a classic Arnold Schwarzenegger action-comedy flick with several memorable scenes, but perhaps none more iconic than Arnold flying in an AV-8B Harrier to (spoiler alert) rescue his daughter from terrorists. That twenty minutes or so of film time involving the Harrier is particularly important for a relatively small community of Marines, Harrier mechanics and pilots, that I happen to be part of.

This may come as a shock to a lot of you: these scenes are riddled with mistakes and inaccuracies. Imagine how betrayed we all felt by the movie that has the bad guy successfully jump a motorcycle from the top of a hotel to land in the pool across the street without a scratch. The movie where Jamie Lee Curtis (Helen Tasker) drops a MAC-10 machine pistol down a flight of stairs, and the gun fires a burst of rounds during every bounce on the steps, dispatching an entire squad of terrorists and leaving the female lead unharmed. The nerve of these Hollywood types to take creative license with the jet we know and love. They went too far!

Alright, the truth is, most of the people I know saw the movie before they even knew what a Harrier was, and even after the fact, the movie is entertaining and good for a chuckle. But on the other hand, picking apart mistakes made by military movies is a favorite past time of all veterans, and we in the Harrier community are no exception. There are some things that stood out to me as immediately wrong, but as I have mentioned, I wasn’t the most knowledgeable Harrier guy on the block, either. I had to put some of these questions to my more qualified friends from those days, and got a lot of help from a current Harrier pilot who asked to remain anonymous. So let’s get to dissecting these discrepancies, one by one.

The amount of hearing loss alone that would have taken place in this movie is devastating. The “ground noise” of an AV-8B is 140 decibels, which actually falls slightly under that of similarly-sized aircraft like the F/A-18 or F-35, but still well over what it takes to cause permanent hearing damage. When we worked on the flightline and a jet was turning nearby, we were actually supposed to wear double hearing protection in the form of ear plugs and our “cranials” (basically a plastic helmet with earphones). Admittedly, I didn’t always wear both (maybe those class-action lawsuit guys will stop bothering me now that I’ve admitted that publicly), but let’s just say no hearing protection at all would have put a real strain on my marriage considering my wife already gets frustrated with how deaf I am.

However, no hearing protection at all is exactly what we see in multiple scenes. First, the two Harrier pilots land at the end of Seven Mile Bridge in the Florida Keys (1:59:10), where a significant amount of police are seen directing the confused and frightened civilians away from the bridge, and Tom Arnold’s character (Gibb) is instructing them to avoid looking at the flash from the imminent nuclear blast. Presumably, most of these people did not have earplugs handy, but they appear somehow unphased by the two ear-splitting beasts descending upon them.

Within a couple of minutes, Arnold’s character (Harry Tasker) has found out his daughter Dana has been kidnapped, and commandeers one of the Harriers to take matters into his own hands (2:02:10). Once again, plenty of bystanders nearby are mostly unphased by the turning jet only about 50 yards away. One could make the flimsy argument that the police and Gibb have had their hearing ruined by years of service involving firearms, but this seems less likely for Harry’s wife, Helen, who instead uses her hands to cover her mouth in concern.

Then, our protagonist (who, by the way, also has no hearing protection) receives a situation report from their man on the inside using a handheld radio (2:06:15). The only problem is, there’s no way that he could hear a single thing on that radio, according to my pilot source. So the critical information he receives about the location of his targets and the ever-important hostage never would have been possible.

The whine of the Pegasus turbofan engine is only faintly heard while Harry instructs a frantic Dana to “Hang on!” or when the boss bad guy, Salim, trains his AK-47 on Harry and demands he take the plane down. Any pilot or maintainer would be happy to tell you that none of this dialogue would be taking place, and while you couldn’t hear it, they would just be screaming something to the effect of, “Oh my God! I think my brain is leaking out of my ears!”

The gun doesn’t work that way

The Harrier’s GAU-12 Equalizer five-barrel Gatling cannon fires a devastating burst of 25mm rounds at a rate of 3,600-4,200 rounds per minute. There’s just one problem: Harriers are only armed with 300 rounds. Sparing you the math lesson on proportions, that’s a total of five seconds, at best, before the Harrier expends all its ammunition. Were the guns fired for longer than five seconds in the movie? Let’s take a look.

Before Harry takes control of one of the jets, both pilots fire a realistic burst of about four seconds at one of the trucks trying to get across the bridge. The second pilot neutralizes the lead vehicle (1:53:10). Nice shooting, sir!

But that’s the last we see of the cannon, right? Nope. Harry’s first move when he gets to the skyscraper is to hover menacingly up to the floor with the bulk of the terrorists, pausing briefly to allow his badassery to soak in while his enemies realize the error of their ways. He then unloads a 12-13 second burst from what would have been an empty gun (2:07:44).

Then three adversaries in a helicopter begin firing upon Harry as he is trying to retrieve his daughter from the crane she is stranded on. He yaws the jet to his right and returns fire with another six or seven-second burst before the helicopter escapes behind another building (2:09:16). This was a fun trip to imagination-land where a Harrier carries an additional 1,000 rounds or so!

To be fair, “True Lies” is far from the first movie to take liberties with a weapon’s capacity, and it won’t be the last. But there’s another problem with these scenes besides the unlimited ammo cheat code: The Harrier’s GAU-12 runs on bleed air from the engine. While the jet is in its trademark hover, that bleed air is prioritized for use by the Reaction Control System (RCS) that keeps the jet from spinning out of control. My pilot source tells me that it would be “theoretically plausible” to squeeze off a few rounds before the gun jammed, if all the conditions (wind, temperature, weight distribution, fuel load) are perfect, but nothing like the firestorm Harry unleashes.

Hovering is incredibly difficult, for both pilot and jet

Making a 20,000-pound aircraft float on air is no simple task. From the pilot’s perspective, hours upon hours of training are necessary to master the skill, without even mentioning all of the time dedicated to conventional flight. Our hero, Harry Tasker, is evidently a former Harrier pilot. His partner, Gibb, conveniently informs us when he says, “Do you realize it has in fact been ten years since you’ve been behind the wheel of one of these things?”

Ten years… Harrier pilots have to train constantly and are required to qualify multiple times per year in various scenarios just to prove they are worthy of the cockpit. But Harry Tasker is one of the government’s top intelligence operatives. We can play along and cast aside that he hasn’t flown in a decade, because he’s basically a superhero capable of retaining skills at a level far above the average human. Fine, I’ll bite.

But unless “True Lies” takes place in the same universe as the “Terminator” franchise, and Harry becomes one with the jet because he is actually another cyborg sent from the future to prevent a nuclear war (wait a minute, that actually almost makes sense), then there are some things that even he couldn’t do. There is a sequence where Harry keeps the jet steady, while he is focused on trying to keep his daughter alive and also fending off a knife attack from Salim (2:10:15). My pilot source, in particular, takes issue with this:

“Hovering is very intensive with control inputs. There’s no way he let’s go of the stick for more than a couple seconds without the jet going into an irrecoverable situation.”

This is all before mentioning how taxing maintaining a hover is on the jet. Harry is only in a hover for about five minutes of movie time, which actually is line with the Naval Air Training and Operating Procedures Standardization (NATOPS) flight manual that governs aviation for the Navy and Marine Corps. However, I asked my very helpful pilot about the stresses that would be placed on the jet in this action-packed sequence, and his expert opinion is that the engine would have flamed out at some point.