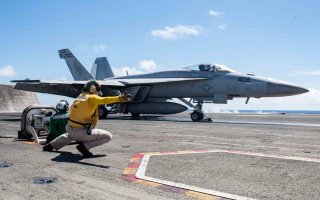 Cutting defense to fund other spending priorities is not destiny; it’s a choice. The active judgment to cut defense has had manifest and deadly consequences after every single downturn. No amount of reform, efficiencies, innovation, or new operational concepts can gloss over the negative impacts of arbitrary budget cuts borne by those in uniform years later.

As Pentagon leaders continue to ramp up to more effectively compete with China and Russia — an objective that costs no less than $36 billion each year above inflation to achieve — others are already clamoring for defense cuts. Even though any defense budget reductions are bound to make not a dent in America’s debt bomb but will surely worsen already damning trends in declining defense readiness.

Reading the Washington tea leaves, the Congressional Budget Office (CBO) has outlined strategy-defying selections in a cafeteria menu for Capitol Hill. In their Options for Reducing the Deficit: 2021 to 2030 report, released on Dec. 9, the CBO provided 14 options for potential defense cuts that in many cases may lead to saving money in the short term but without regard for the consequences to morale, readiness, and missions globally. From housing benefits to weapons systems, at least the approach was broader than the usual ways of Washington to disproportionately cut weapons and equipment (procurement).

CBO essentially baskets defense cuts by category: Bombers and Aircraft, Carriers and the Nuclear Triad, Salaries and Employment, and Overall Budget Reductions. The options provided for bomber and aircraft fleet cuts include the retirement of the entire F-22 and B-1B bomber fleets in 2022 and eliminating the military personnel in those squadrons, ending the equipping of bombers with cruise missiles armed with nuclear warheads around 2030, and deferring the development of the B-21 bomber until after 2030. In total, they represent $93 billion in savings over 10 years. But this would create a disturbing gap in naval readiness amid growing great power competition. Further, the cost of developing those fleets will grow overtime — simply delaying what Congress will eventually have to own up and purchase.

For carriers and some nuclear programs, the CBO is preparing aging systems for the coffin rather than resuscitation. One proposal is to cancel the fifth Ford-class aircraft carrier and any future carrier purchases. Ten of America’s 11 aircraft carriers are nearly 30 years old, however, and are planned to phase out starting in 2025 with Ford replacements. This option fails to recognize that the Navy has a (very busy, forward, and global) job to do. Additional reductions come from decreasing the annual budget authority for ship construction to its 30-year average in real terms, from the Navy’s 2020 shipbuilding plan. Whether or not we need 12 carriers or 500 ships may be debatable, but cancelling all future carrier development and halting ship upgrades and construction to meet global security demands as tensions rise in the western Pacific would be inviting trouble unnecessarily that itself will be costly to address.

The new administration should reject the assumption that the defense budget must come down because of spending to combat the pandemic. The US military cannot deter the Chinese and defend our global interests without additional support.