What Would An American Invasion of Canada Have Looked Like? 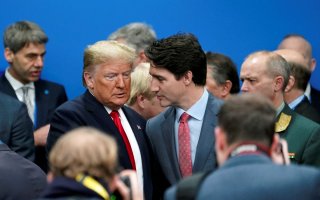 Here's What You Need to Remember: In the end, however, the United States would have occupied the vast bulk of Canada, at the cost of most of its Pacific possessions. And the Canadians, having finally been “liberated” by their brothers to the south? Eventually, the conquest and occupation of Canada would have resulted in statehood for some configuration of provinces, although not likely along the same lines as existed in 1920 (offering five full states likely would have resulted in an undesirable amount of formerly Canadian representation in the U.S. Senate).

Even as the guns fell silent along the Western Front in 1918, the United States and the United Kingdom began jockeying for position. Washington and London bitterly disagreed on the nature of the settlements in Europe and Asia, as well as the shape of the postwar naval balance. In late 1920 and early 1921, these tensions reached panic levels in Washington, London, and especially Ottawa.

The general exhaustion of war, combined with the Washington Naval Treaty, succeeded in quelling these questions and setting the foundation for the great Anglo-American partnership of the twentieth century. But what if that hadn’t happened? What if the United States and the United Kingdom had instead gone to war in the spring of 1921?

The U.S.-Canadian border would have constituted the central front of the War of 1921. Although Washington maintained good relations with Ottawa, war plans in both the United States and the United Kingdom expected a multipronged invasion into America’s northern neighbor, designed to quickly occupy the country before British (or Japanese) reinforcement could arrive. Canadian declarations of neutrality would have had minimal impact on this process. Plans for initial attacks included the seizure of Vancouver, Winnipeg, the Niagara Falls area, and most of Ontario.

Given the overwhelming disparity between available U.S. and Canadian military forces, most of these offensives would probably have succeeded in short order. The major battle would have revolved around British and Canadian efforts to hold Nova Scotia, New Brunswick, and especially the port of Halifax, which would have served both as the primary portal for British troops and as the main local base for the Royal Navy. U.S. military planners understood that Halifax was the key to winning the war quickly, and investigated several options (including poison gas and an amphibious assault) for taking the port.

And what about Quebec? The nationalism of the early twentieth century did not look kindly on large enclaves of ethnolinguistic minorities. Moreover, the United States had no constitutional mechanisms through which it could offer unique concessions to the French-speaking majority of the province. In this context, Quebecois leaders might have sought an accord with Washington that resulted in Quebec’s independence in exchange for support for the American war effort, and Washington might plausibly have accepted such an offer. An accord of this nature might also have forestalled French support from their erstwhile British allies. If not, the U.S. Army planned to seize Quebec City through an overland offensive through Vermont.

For its part, the Royal Navy had at its disposal nine dreadnoughts, twenty-three super-dreadnoughts, and nine battlecruisers. The British ships were generally older, less well armored and less heavily armed than their American counterparts. Nevertheless, the Royal Navy had the benefit of years of experience in both war and peace that the USN lacked. Moreover, the RN had a huge advantage in cruisers and destroyers, as well as a smaller advantage in naval aviation.

Given the strength of the IJN (four battlecruisers, five super-dreadnoughts, two dreadnoughts) and the necessary commitment to an “Atlantic first” strategy, the United States probably could not have held the Philippines, Guam, Wake, Midway, or most of the other Pacific islands. Hawaii might have proven a bit too far and too big, and it is deeply unlikely that the Japanese would have risked a land deployment to western Canada (although U.S. planners feared such an eventuality), but the war would have overturned the balance of power in the Western Pacific.

The new map, then, might have included a United States that extended to the Arctic, an independent Quebec, a rump Canada consisting mostly of the Maritimes, and Japanese control of the entirety of the Western Pacific. Tokyo, rather than London or Washington, would have stood as the biggest winner, hegemonic in its own sphere of influence and fully capable of managing international access to China.

Robert Farley, a frequent contributor to the National Interest, is the author of The Battleship Book. He serves as a Senior Lecturer at the Patterson School of Diplomacy and International Commerce at the University of Kentucky. His work includes military doctrine, national security, and maritime affairs. He blogs at Lawyers, Guns, and Money and Information Dissemination and The Diplomat.

This first appeared in 2018 and is being reposted due to readers' interests.