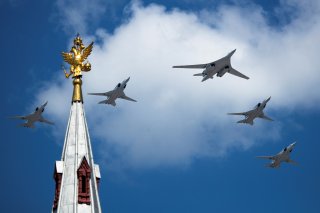 Here's What You Need to Remember: The M-model Tu-160 features new engines and avionics and a metallic canopy treatment that reduces the type's radar-reflectivity. But the Tu-160 isn't stealthy, even in its modernized form.

David Axe was Defense Editor of the National Interest. He is the author of the graphic novels  War Fix, War Is Boring and Machete Squad. This first appeared two years ago.