What's China Up to in the Arctic? 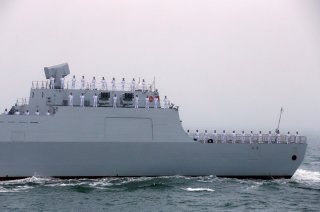 Here's What You Need to Remember:  In applying its shipbuilding prowess to exploit this entirely new market for ice-class ships, China is forging a true win-win for China-Russia relations. Moreover, Beijing and Moscow are doing this with the Yamal Arctic gas field as one of the premier crown jewels of their enhanced bilateral cooperation.

A rather odd incident in the annals of U.S.-China relations occurred in September 2015. At the very same time that President Barack Obama decided to drop in for an unusual visit to the state of Alaska, a Chinese naval squadron of five ships suddenly appeared in the Bering Sea. They had left from a joint exercise with the Russian Pacific Fleet and did not tarry for too long off American shores. Did this movement constitute a clever warning, designed specifically to humiliate the American President on his own turf? Or was it pure coincidence—just a minor excursion into unknown waters for a Chinese fleet that was undoubtedly just beginning to stretch its sails on the global stage? Is it possible that China has military designs on the Arctic, of which this was the initial step?

Available evidence and simple deductive logic suggest that skepticism is warranted concerning the final question above. And yet it must be admitted now that Beijing’s interest in the Arctic is something more than a passing fancy. Two announcements from Beijing during the course of 2018 implied that the issue was assuming new significance within China’s overall foreign policy. First, there was the “White Paper” on China’s Arctic policy that elevated the approach to the “Polar Silk Road” strategy. Next, came the “bombshell” that China intends to build a nuclear icebreaker.

Some new details emerged in mid-March regarding the specifications of Beijing’s icebreaker. It will be 152 meters in length, 30 meters wide, and will displace 30,000 tons. Thus, it will be quite comparable to Russia’s giant Arktika-class. The vessel, that will cost China about 1 billion RMB, is to be powered by two 25MW high pressure reactors. According to an analysis in the Barents Observer, “Nuclear power has the advantage of long range and massive power.” Still, most of the writing about this prospective ship has focused on the implications that such an “experiment” could have for China’s nascent nuclear aircraft carrier project. But what of China’s Arctic ambitions?

A somewhat tantalizing article from the final 2018 edition of Modern Ships [现代舰船] ran under the headline “Why does China need an icebreaker [中国为什么需要破冰船]?” Not a few foreigners are asking the same exact question. Accompanying this headline is a bold close-up photo of China’s newest icebreaker Snow Dragon 2 [雪龙2号]. This new diesel-powered icebreaker was built at the famous Jiangnan Shipyard in Shanghai and launched on September 10, 2018. This ship is viewed as a major improvement on Snow Dragon 1, which had been built in Ukraine. According to this account, Snow Dragon 1 hardly provided the crew with a smooth ride, so that “in sea areas prone to stormy waves . . . the rocking of the ship proved extremely violent [在风浪比较大的海域 . . . 船体摇荡复合运动十分剧烈].” In addition, the new ship is said to be an improvement since its predecessor had living and working conditions that were “not ideal,” and, moreover, its “icebreaking capabilities were also quite limited.” “All these defects have received comprehensive remedy on-board ‘Snow Dragon 2’ [这些问题在’雪龙2号’上都得到了全面的改善].” Making the observation that Beijing’s interest in icebreakers is not all that new new, the article also briefly mentions China’s first indigenously-built icebreaker, called Skyline [天行] that was actually built in Tianjin during the 1930s.

Regarding military icebreakers, the report does mention that the PLA Navy received its first icebreaker in 1969. Notably, the PLA Navy over the last few years received two new military ice-breakers for China’s “northern sea areas [北方海域].” At 103 meters in length and displacing 4,500 tons, these relatively new vessels are capable of breaking ice more than one meter thick. These ships Sea Ice [海冰] 722 and 723 will be used primarily in the Bohai and Yellow sea areas for aiding ships in distress, search and rescue of personnel, patrol, escort, climate change research. They will also, according to an April 2016 article in the official PLA Navy magazine Navy Today [当代海军], “increase the Navy’s capabilities to adapt to fighting in special environments.” Just a month earlier in the same PLA Navy magazine, another article had intoned: “With respect to Arctic resources, whoever gets there first, will enjoy the most wealth.”

Returning to the 2018 analysis, there is, not surprisingly, a lengthy description of Russia’s icebreaker fleet, “the world’s largest in size [世界上规模最大].” The article also noted Russia’s new icebreaker, the six-thousand-ton Type 21180 Ilya Muromets, but it is likewise noted that this is Moscow’s first new icebreaker in the last forty years. This final observation is a likely clue regarding China’s activities in this sphere. The ambitious Russian timetable for launching the massive thirty-three-thousand-ton Type 22220 class is related and all three of the behemoths (Arktika, Sibir, and Ural) are apparently under construction with a possible date for completing the first in 2020. The Canadian fleet also gets a look in this Chinese analysis, but it is related that while quite numerous, Ottawa’s force mostly “are of a relatively small displacement [排水量比较小].”Still, three new icebreakers have been ordered from Norway and the first has entered service.

As for explaining the recent world-wide passion for icebreaking, the Chinese analysis states the obvious point that these countries are seeking resources, on the one hand, and opening up the polar shipping routes, on the other. With respect to natural resources, Beijing covets the “oil, natural gas, coal, gold mining, uranium mining, manganese nodules, fish and shrimp [石油, 天然气, 煤炭, 金矿, 铀矿, 锰结核, 鱼虾],” especially the natural gas. As to Washington’s disposition, it is noted that the United States has disagreements with both Canada and also Russia. Washington “especially deeply opposes Russia’s boundary limitation claims, and insists on so-called ‘freedom of navigation’ for Arctic shipping routes [尤其强烈反对俄罗斯的划界主张, 并重点强调在北极航线的所谓‘航行自由’].”

Indeed, it seems the prospective Arctic shipping opportunities are driving China’s new focus on the Arctic, above all. The December 2018 launch of the ARC7-class super ice-hardened LNG tanker Boris Sokolov from Guangzhou International Shipyards marks another milestone for China’s march along the “Polar Silk Road.” That massive ship is designed to operate year round along the Northern Sea Route (NSR) in temperatures as low as 50 degrees below zero centigrade. This ship is a part of what one Chinese shipping magazine calls a “LNG tanker ship boom [运输船火爆].” In applying its shipbuilding prowess to exploit this entirely new market for ice-class ships, China is forging a true win-win for China-Russia relations. Moreover, Beijing and Moscow are doing this with the Yamal Arctic gas field as one of the premier crown jewels of their enhanced bilateral cooperation.

However, the Chinese analysis also points out that “The impact of climate change on the Arctic . . . for other regions of the world are difficult to predict [北极地区的气候 . . . 变化对世界其他地区的影响也不容易视].” From that perspective, it is particularly interesting that Xuelong 1 undertook a transit of the Central Arctic Passage [北极中央航道] during the summer of 2017. The important journey for the Chinese icebreaker is documented (with detailed maps and ice condition observations) in great detail in this article. Could it be thus that China is determined to develop its own icebreaker fleet as a hedge against the possibility that in a few decades the central route could even supersede the Northern Sea Route, which follows the Russian coastline? Or perhaps Beijing just does not want to be overly dependent on Russia for ice-breaking capability.

In any case, the evidence surveyed here mostly suggests that Beijing’s interest in the Arctic is quite narrowly economic and commercial in nature. Here and there, one can still find data points that could lead to an alternative to conclusion. For example, about a year ago, an article with the following title was published in an important Chinese shipbuilding journal: “Peridynamic Model for Submarine Surfacing through Ice [潜艇破冰上浮近场运力学模型].” Moreover, Washington has made a rather overt warning in China’s direction from its own near-Arctic base (Elmendorf Air Force Base in Alaska) very recently and this threat has been received by the Chinese side. If Washington and its allies do not wish to see China take a militarized approach to the Arctic, they must themselves take steps to avoid escalatory and threatening moves along the great northern flank.