This Is What's Really Driving Income Inequality In America 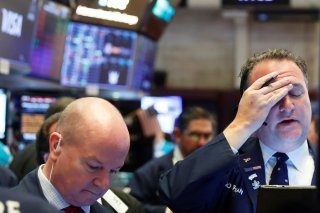 The issue of economic inequality will almost certainly be a key one in the upcoming presidential election. Joe Biden is already proposing some $4 trillion in tax increases, including higher burdens on corporations and wealthier individuals. These tax hikes sync with the progessive argument that even though the economy just ended a record long expansion, income inequality meant too few Americans really benefited.

So how should we think about inequality in America? It is about rapacious greed run amok amid  a “late capitalism” economy? Or is it something else, such as technology? Especially technology. Back in December 2015, I had a great podcast chat with economist Steven Kaplan of the University of Chicago Booth School of Business about the drivers of American inequality. From that conversation:

Kaplan: I think both — those are both elements of the same thing. So for example, take someone in finance who’s running a hedge fund. And obviously there’s been a fair amount of wealth created in the financial sector. … Some of those firms are managing tens of billions or hundreds of billions of dollars. You couldn’t do that 30 years ago. You didn’t have the technology to do that. Today, with computers and software you can manage much larger sums than you could back then. So that would be one example.

Take a law firm. Lawyers now are working … on very large deals and they are getting — their value added applied to larger companies and global companies, [which] becomes more valuable when you’re scaling it over larger assets. So that would be another way where it’s probably globalization and scale, rather than technology per se.

But some of it is the direct thing, what you’re talking about with robots, but some of it is, call it indirect, that software allows you to do things, you know, with a lot more assets and fewer people. I mean, another thing is managing restaurant chains. Restaurant chains actually are a source of wealth. Starbucks, McDonald’s and Chipotle can manage these things and scale it, and a lot of it is because you have software that you didn’t have 30 years ago.

Pethokoukis: Democrats have an alternate theory. I’m not sure if they believe that theory is to the exclusion of yours or is just more important, but their theory is that a big reason we’ve seen this rise in inequality is because of CEO pay or executive pay. … They’ll point to CEO pay and pliant corporate boards giving very fat pay packages to executives, golden parachutes. And maybe cultural norms have changed [so] that CEOs don’t feel bad about having an income many hundreds of times [that] of the average worker. And maybe because we’ve cut taxes, there’s a greater incentive for these CEOs to try to get big, fat pay packages. How do you address that?

Kaplan: That’s a really hard one to understand for the following reasons. I mean, they’re more or less saying that it’s public company driven. It’s driven by the fact that the boards are not being tough enough on the CEOs. And there, that’s very unpersuasive. I’ll give you a bunch of reasons.

Second of all, you have, again, the hedge fund investors, the private equity investors, law partners, partners at places like McKinsey, BCG, Bain — people who are all in business who have also done remarkably well and at least as well as the CEOs over the last 25 years. And again, those people are compensated clearly at an arm’s length market kind of basis. And so if, again, it were compliant boards and sort of this corrupt bargain, it’s very hard to explain why your typical law partner is at a top firm is probably making $3 to $5 million, which is much more than he or she made 25 years ago and is not all that far off from the median pay of an S&P 500 CEO, which is on the order of $10 or $12 million.

So these are all huge numbers. And they’re numbers that get a lot of attention and are just big relative to the average person. But what it seems to me is that these are for better or for worse market wages in a world where, because of technology, because of globalization, these people are adding value over larger amounts of assets. And that’s what their time or their participation is worth.