When to Go Full 'Auto' with Your M27 Infantry Automatic Rifle 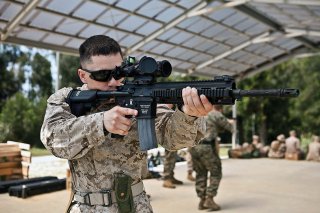 From 5, 30, and 80 meters, Wade and Cpl. Gerald Trado, an infantryman with 3rd Battalion, 6th Marines, take turns sending rounds downrange in semi-automatic and fully automatic. In terms of accuracy, the results are mixed.

It’s no mystery why the video features the M27 Infantry Automatic Rifle. The Corps’ long-sought-after replacement for the M249 Squad Automatic Weapon is also expected to replace the majority of M4s for infantry Marines, Marine Corps Times reported in August. The rifle offers a shooter the ability to provide heavy suppressive fire, or accurate semi-auto fire, and outranges the M4 by 100 to 150 meters. Though as Wade points out in the video, just how accurate those rounds will depend on what mode you’re firing in.