When Iran Turned The F-14 Tomcat Into A Bomber, America's Fingerprints Were All Over It 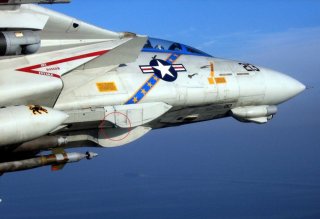 Here's What You Need To Remember: The U.S. Air Force first used such bomb racks during mid-’80s, around the same time Iran started its Tomcat-bomber project. Because there were so few of the racks in existence, it’s highly improbable that the Iranians got them through the black market and without the knowledge of the U.S. Air Force.

It was one of the first attacks of the American-led invasion — and it played out under the watchful gaze of a secretive detachment of aging but still very capable U.S. Navy F-14 Tomcat fighters that the sailing branch modified to carry bombs.

But the American Bombcats actually the first F-14s to carry bombs. Iran in the 1980s outfitted its own Tomcats for heavy bombing raids.

Radio — and secure data-link in the case of the most advanced F-14D model — allowed the FAC(A) Bombcat to steer other warplanes toward targets on the ground. “Long, dangerous and incredibly important, these FAC(A) sorties required exceptional situational awareness,” Tony Holmes explained in the September 2015 issue of Combat Aircraft magazine.

Shortly before the invasion of Iraq kicked off, a special detachment composed of five F-14As, five two-person crews and 30 maintainers from Navy Fighter Squadron 154 left the aircraft carrier USS Kitty Hawk and set up shop ashore at Al Udeid airbase in Qatar, where U.S. Special Operations Forces also were located. The Bombcats’ mission, details of which remain secret 12 years later, was to support these specialized troops.

The attack was a success. The killing blow came when the F-14s guided Air Force F-15Es as they dropped 5,000-pound bunker-buster bombs to wipe out the underground bunker. Today VF-154 flies F/A-18F Super Hornets.

Two decades earlier during the Iran-Iraq war, Iran enjoyed similar success with its own bomb-hauling F-14s. Tehran had acquired 79 of the powerful F-14s before the 1979 Islamic revolution that resulted in Iran and the United States severing ties.

The Tomcat has a central under-fuselage canal that reduces the drag effect from large bomb loads. The F-14 also has a more powerful computer than Iran’s other fighter types do, meaning Tehran’s engineers could modify the Tomcats with automatic bomb-release algorithms. What the Iranian F-14s lacked in the early 1980s was bomb racks.

The Iranian air force’s self-sufficiency office claimed for years that the program to add bombs to F-14s was a fully domestic project. Now we know that’s not true. During a recent air show at 8th Air Base in Isfahan, the air force displayed an F-14 with a dozen free-fall bombs hanging in its central canal.

The bomb racks were not Iranian, but American BRU-34s and BRU-42s bearing U.S. Air Force markings.

The U.S. Air Force first used such bomb racks during mid-’80s, around the same time Iran started its Tomcat-bomber project. Because there were so few of the racks in existence, it’s highly improbable that the Iranians got them through the black market and without the knowledge of the U.S. Air Force.

At the time, Washington was trying to repair its relations with Iran through secretive arms deliveries. In an affair later dubbed “Irangate,” the U.S. delivered stockpiles of artillery shells and anti-tank weapons to Iran.

The latest information suggests that during the Irangate affair, Washington might have also delivered to Tehran the equipment necessary to convert F-14s to bombers. This development implies direct military contact between Iran and the U.S., through which American officials understood the immediate strategic needs of the Iranian air force.

According to official records, the first F-14 bombing run took place in 1985. The target was the field headquarters of an Iraqi division near the front line. The mission went according to plan, but the bombs fell wide and the target sustained only minor damage.

The next step was to develop a heavyweight bomb. The IRIAF prepared a whopping 7,000-pound munition—one of the biggest air-to-ground munitions ever deployed. This time, Gen. Abbas Babaei, the Iranian air force’s commander in chief, traveled to a front-line observation post to see the effect for himself.

The F-14 pilot signaled the bomb release. The estimated time on target passed … and nothing happened.

Then as Babaei was getting ready to return to his jeep, a powerful blast shook the ground. The F-14 bomber had struck its first mighty blow.