When Japan Conquered Singapore In World War II, Britain's Asia Empire Had Come To An End 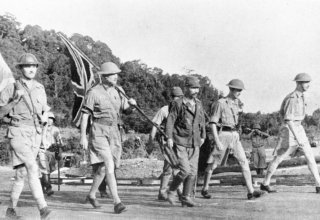 Here's What You Need To Remember: Perhaps the biggest consequence of the fall of Singapore was the destruction of Britain’s Asian empire. Depleted by the First World War and then squeezed dry by the Second, Britain would have lost its empire eventually. But the photos of British generals and soldiers marching into captivity under Asian guns left their mark on colonial subjects.

In the darkest days of World War II, when disaster after disaster almost overwhelmed the Allies, it took a lot to shake a leader like Winston Churchill.

But when the news arrived that the fortress of Singapore had surrendered to the Japanese on February 15, 1942, along with eighty thousand British troops, even Churchill was stunned.

“He felt it was a disgrace,” recalled Lord Moran, the prime minister’s physician. “It left a scar on his mind. One evening, months later, when he was sitting in his bathroom enveloped in a towel, he stopped drying himself and gloomily surveyed the floor: ‘I cannot get over Singapore,’ he said sadly.”

Seventy-five years later, it is difficult to conceive of just how devastating the fall of Singapore was. It was the largest surrender in British history, a humiliation to British arms that would linger for years in the minds of friends and foes alike. It was not just the capitulation of the hub of Britain’s Asian empire, the “Gibraltar of the East” as the British public had been assured. Even worse, it had been conquered by a Japanese army inferior in numbers—and, by the standards of Europeans and Americans at the time, inferior in race as well.

Singapore had long been a strategic prize, perched as it was on the southern tip of the Malay Peninsula, astride the Straits of Malacca and the key shipping shipping lanes between Asia and Europe. But in the 1920s, Britain saw it as the key to its Far East possessions. Realizing that it was no longer strong enough to take on both Germany and Japan simultaneously in the next war, Britain’s solution was to turn Singapore into a naval fortress that could hold out against a Japanese siege until the Royal Navy could sail to the rescue from Europe.

Terrain was an ally, or so the British thought. With the Malay Peninsula sheathed in jungle, swamp and river, they were were confident that a Japanese attack launched from the north, out of Thailand, would bog down as it advanced down the long, narrow strip of land between Thailand and Singapore. Therefore there was no need to fortify Singapore’s defenses on the landward side, facing north to the Malayan mainland. Any attack on the island had to come by sea through amphibious invasion, which would be blasted out of the water by big coast-defense guns.

“Curiously enough, throughout all these years of bickering and indecision, it had occurred to barely anyone that Malay had over 1,000 miles of coastline, half of it exposed to Japanese attack,” writes author Arthur Swinson in Defeat in Malaya: Fall of Singapore. “It had occurred to no one either that the defence of the naval base on Singapore island was bound up with the defence of the whole Malayan Peninsula.”

Or, as Churchill recalled, the possibility that the fortress would have no landward defenses “no more entered into my mind than that of a battleship being launched without a bottom.”

Perhaps given enough money, troops and aircraft, the strategy might have worked. Unfortunately, Britain’s strategic reach exceeded its financial grasp. With money tight during the 1930s, defense preparations languished while the army, navy and air force argued over who was responsible for defending the island. Meanwhile, a lethargic colonial attitude reigned to the point where troops couldn’t train because rubber planters complained it would ruin their crops.

However, the fatal flaw in the British plan turned out to be a crazy German ex-corporal named Adolf Hitler. Not in their darkest dreams had it occurred to British planners that western Europe would be conquered in 1940 and Britain left to confront the Nazi colossus alone. With England under assault by bombers and U-boats, and the Suez Canal and Middle East oil threatened by Rommel, there were no forces to spare for the Far East.

However, as frequently happens with military disasters, frantic measures were taken at the last minute, which only made defeat more painful. As war loomed in the Pacific, reinforcements were hastily dispatched, including crack Australian and Indian battalions: it turned out that many of the troops, including the Australians and Indians, were only half-trained. The Royal Air Force had perhaps a hundred fighters—obsolete American-made Buffalo and aging Hurricane fighters—that were blasted out of the air by Japanese Zero fighters flown by elite pilots.

The battleships Prince of Wales and Repulse were dispatched to the area, though a pair of capital ships with little air or naval support stood little chance against the Japanese offensive. “Are you sure it’s true?” Churchill asked when told both ships had been sunk by Japanese torpedo bombers. It was.

The Japanese landed in southern Thailand and northern Malaya on December 8, in a meticulously planned operation. Still, against Japan’s thirty thousand men, the British could pit eighty thousand. Despite Japanese control of the skies, this should have been more than enough to drive the invaders into the sea.

What ensued was as much farce as tragedy. Convinced that tanks were useless in the jungle, the British had no armor. No one thought to inform the Japanese, who brought ashore tanks that successfully maneuvered through the trees as they stampeded British troops. Time and again, the British attempted to make a stand, only to be outflanked and routed by Japanese forces who compensated for lack of numbers by relying on mobility, aggressiveness and deception. For example, small Japanese units infiltrated British lines to attack artillery positions and command posts, a tactic that also worked against the Americans—for a while.

Finally, on January 31, the Japanese reached the Straits of Johore, between Singapore’s island and the mainland. The straits were one to three miles wide, not insurmountable but still quite formidable if defended. The Japanese were running low on supplies, and running on a tight timetable if they were to complete their Pacific conquests.

That didn’t daunt Gen. Tomoyuki Yamashita, the Japanese commander later dubbed the “Tiger of Malaya.” As Yamashita said later, “My attack on Singapore was a bluff, a bluff that worked. I had 30,000 men and was outnumbered more then three to one. I knew if I had to fight long for Singapore I would be beaten. That is why the surrender had to be at once. I was very frightened all the time that the British would discover our numerical weakness and lack of supplies and force me into disastrous street fighting.”

The British were too disorganized and dispirited to perceive their opponent’s weakness. While bombers pounded Singapore and feint landings deceived the defenders, the Japanese crossed the straits in small boats on February 8. Their initial foothold could have been crushed by prompt counterattacks. The counterattacks never came.

On February 15, Lt. Gen. Arthur Percival, the British commander, met Yamashita to sign an unconditional surrender. More than eighty thousand British troops found themselves penned barbed wire. Many died in the hellish conditions of Japanese prison camps, or while working on the infamous Burma-Thailand Railway (immortalized in the movie The Bridge on the River Kwai). Some of the Indian prisoners defected to form the Japanese-controlled Indian National Army that fought against the British.

Yamashita went on to defend the Philippines against a U.S. invasion in 1944. He was later charged with war crimes in Singapore and the Philippines, on the basis that even if he didn’t order atrocities, he was still responsible for those committed by troops under his command (some wondered whether he was also being punished for humiliating the Allies on the battlefield). He was hanged on February 23, 1946.

What were the lessons of Singapore? Like a Biblical prophet, the battle delivered the message that the few could defeat the many—if the many were ineptly led. The British didn’t just suffer from poorly trained troops, deficient commanders, negligent preparation and government penny-pinching. They were victims of lack of imagination, as in failing to conceive that an army of Asians could drive tanks through the jungle.

Perhaps the biggest consequence of the fall of Singapore was the destruction of Britain’s Asian empire. Depleted by the First World War and then squeezed dry by the Second, Britain would have lost its empire eventually. But the photos of British generals and soldiers marching into captivity under Asian guns left their mark on colonial subjects. The collapse of Britain’s Asian empire, along with those of the Dutch, French and eventually the Japanese, left a power vacuum that would be filled by the United States and China.

Three-quarters of a century later, the legacy of the fall of Singapore still haunts us.