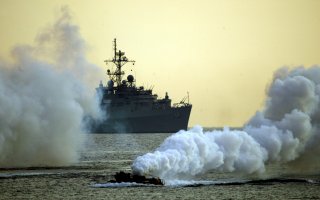 Here's What You Need to Know: A lookout spotted a large spiky contact mine straight before the USS Pirate. Pirate’s sweep was designed to disable mines behind her, but her current trajectory meant she was bound for a deadly collision.

"I remember the water was very cold and at first most of the crew began swimming towards the shore until the beach guns opened fire and began blowing guys out of the water.”