When Will Air Force One Go Hypersonic? 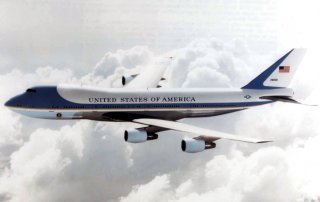 On Thursday, aerospace company Hermeus announced that they had secured an Air Force contract to develop a hypersonic version of the President’s plane, known within the Air Force and beyond as Air Force One.

Hypersonic is a term used to describe aircraft that can travel at sustained speed in excess of Mach 5, or slightly higher than 3,836 miles per hour. There are no passenger-rated aircraft on earth that can fly at such high speeds, and even Boeing’s forthcoming replacements for the existing Air Force One are expected to top out at only about 650 miles per hour.

That means Hermeus is promising to build a presidential aircraft capable of beating the existing Air Force One in a race by better than 3,000 miles per hour.

“Leaps in capability are vital as we work to complicate the calculus of our adversaries,” Air Force Brigadier General Ryan Britton, the Program Executive Officer for Presidential and Executive Airlift, said in a statement.

“By leveraging commercial investment to drive new technologies into the Air Force, we are able to maximize our payback on Department of Defense investments.”

Traveling at these speeds, the Hermeus Air Force One replacement would be capable of flying from New York to Paris in just 90 minutes. Hermeus is still a fairly new company, founded by leaders hailing from future-facing companies like SpaceX and Blue Origin. In order to secure this contract with the Air Force, Hermeus designed and built a Mach 5-capable prototype engine in just nine months.

Hypersonic engine platforms face a number of challenges in operation, ranging from the incredible speed of the inflow of air into the jet turbine at such sustained speeds, to the incredible heat produced by friction as the aircraft tears through the sky at thousands of miles per hour.

The legendary SR-71 Blackbird, the fastest military aircraft in history, was capable of sustaining speeds in excess of Mach 3, or better than 2,300 miles per hour. The friction of oxygen molecules bombarding the aircraft at that speed created a number of engineering challenges for the aircraft. In fact, the SR-71’s cockpit windshield had to be made out of quartz that was fused ultrasonically to the aircraft’s titanium body in order to sustain exterior temperatures that would exceed 600 °F (316 °C) during high speed flight.

Hypersonic technology has been at the forefront of Russia, China, and America’s weapons research for the past few years, as each nation races to develop hypersonic-capable ballistic missiles. At hypersonic speeds, none of the world’s existing missile defense systems are capable of intercepting an inbound attack, making these new weapons a potential game changer for peer-level conflict in the 21st Century. The United States is currently lagging behind the competition in terms of fielding operational hypersonic weapons, though it seems apparent that America is working to develop more advanced and diverse hypersonic missiles than its Chinese and Russian competitors.

While some hypersonic engines are little more than a high-powered rocket, that approach would not work for a reusable aircraft. Scramjet propulsion, which incorporates a specially designed turbine that allows for high-speed airflow, is another means of achieving hypersonic velocities, but these engines don’t work very well until they reach the high speeds required to sustain them. As a result, missiles and test platforms that utilize scramjets often rely on rocket engines to get them going fast enough for the scramjets to function. Hermeus, however, has developed a method of ramjet propulsion that will allow their aircraft to take off and land at normal speeds, and still sustain flight in Mach 4-5 conditions.

This approach, which has been called a combined cycle engine, would allow an aircraft to take off and land at subsonic speeds like any other aircraft, while allowing it to achieve extremely high speeds during the duration of the flight. Developing this sort of technology could have far reaching effects throughout the entire aviation industry, and in particular, within the sphere of military aviation.

By traveling at hypersonic speeds, Hermeus’ Air Force One could cut the flight time from Washington D.C. to London to under two hours–five hours faster than the current Air Force One could make the flight. Of course, the president’s schedule is a busy one, but there are other places where this technology could be leveraged, especially in the military.

A hypersonic aircraft that can carry passengers would have a number of uses for the U.S. military, from reconnaissance to tactical insertions of special operators. A hypersonic plane could evade most air defenses in the same way the SR-71 once did–by outrunning them. There are no existing air defense platforms that could reliably shoot down a hypersonic aircraft, making such a platform of extreme value not just to the White House, but to the military as a whole.

Of course, it will likely be more than a decade before we see Hermeus’ hypersonic plane take to the skies, and by then, air defenses are likely to have matured enough to make high velocity aircraft of this sort not quite so invincible. None the less, the implications of hypersonic passenger flights could be far reaching and significant for the military and beyond.

This article was originally published by Sandboxx News.