When Will Russia’s Newest Stealth Fighter Take to the Skies? 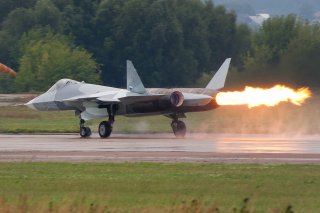 Russia’s infamous Sukhoi Su-57 has had more than its fair share of issues on the long road to production, but the nation may have a saving grace inbound in the form of an all-new stealth fighter set to be unveiled later this month. Details about the new platform are somewhat scarce, but statements made by officials, glimpses of images online, and formal announcements about the aircraft combined make for a fairly fleshed-out idea of what this new 5th-generation jet is all about.

Russia’s new stealth fighter is set to be unveiled at MAKS 2021, an annual Russian exhibition with a full name that translates roughly to the “International Aviation and Space Show.” This event is often a big one for Russian defense firms, as it offers Russia’s military-industrial complex the opportunity to court potential foreign buyers–an element of increasing importance to Russia’s economically hindered military apparatus. This year’s MAKS will be held at the Zhukovsky International Airport in Moscow the week of July 20th, and it’s already turning heads thanks to the announcement that the United Aircraft Corporation (UAC) will be unveiling their all-new stealth fighter during the event.

As should come as no surprise from a nation that prioritizes Information Operations in all military endeavors, UAC, which is primarily owned by the Russian government and includes Su-57 manufacturer Sukhoi, has already released a trailer for the new jet on YouTube. While the video does not show the fighter itself, it does show pilots from a number of foreign Air Forces seemingly getting notifications on their phones that lead them to an airstrip where the new fighter sits.

As will likely come as no surprise to those who followed the development of the Su-57, the video UAP released offers practically nothing about the new 5th-generation fighter, but leans heavily into the idea of pilots from all over the world being awe-struck by the platform.

Russia’s sanction-ridden economy has made Vladimir Putin’s broad military modernization efforts all but impossible without a serious injection of foreign funds. Russia had hoped to export the Su-57, and even began development on the fighter in partnership with India. However, years of setbacks and reports of underwhelming performance prompted India to cut ties with the effort in 2018. Since then, Russia has failed to find anyone else willing to purchase what American and Chinese experts alike have characterized as the least capable fighter of its generation (though it’s important to note, the Su-57 may still be objectively quite capable).

Serial production on the Su-57 finally began in earnest at the end of 2019, only to have the first production fighter from the line crash immediately during its first test flight. With sales going nowhere for the Su-57, Russia likely sees this new jet as the opportunity it needs to finally get into the selling stealth fighters business.

But despite replacing the Su-57 as a potential revenue stream, the new fighter is unlikely to replace it in Russian hangars. Instead, UAC’s new 5th-gen jet will probably aim to compliment the Su-57 in similar ways to how America’s F-35 and F-22 fill different airpower roles in America’s defense strategy.

While we don’t know what Russia’s new stealth fighter will look like, we may have gotten a peek last December when Sergei Chemezov, director of Rostec (UAC’s parent company), was photographed with what appears to be a model of a new fighter on his desk.

Related: IS RUSSIA’S SU-57 THE WORST STEALTH FIGHTER ON THE PLANET?

This new fighter, which has no announced name thus far, will run a single engine, as opposed to the Su-57’s pair of afterburning turbofans, and as such, is expected to be quite a bit lighter, at 18 tons. This parallels America’s stealth fleet, with the twin-engine F-22 weighing in at 43,000 pounds and the single-engine F-35 tipping the scales at around 30,000.

However, despite running one engine, Russian officials have claimed this new fighter will have a top speed of around Mach 2 and incorporate thrust vector control for super maneuverability. In these regards, this new jet would have American’s Joint Strike Fighter outclassed, as the F-35 lacks thrust vector control and its fastest iteration, the landing strip-reliant F-35A, tops out at right around Mach 1.6. The short take-off F-35B and carrier-capable F-35C are much slower operationally, and can only manage supersonic speeds in short bursts (under 60 seconds) without causing damage to the aircraft.

Thrust vector control allows the pilot to orient the thrust of the jet independent of the aircraft itself. This allows for some incredible acrobatics, as the fighter can point its engine or engines in one direction even as it’s moving in another. Fighters with this capability can change direction far faster than those without it, which gives them a significant advantage in a close-quarters dogfight.

America’s F-22 Raptor is the only fighter in Uncle Sam’s arsenal with thrust vector capabilities, as the F-22 can orient its thrust along a single vertical axis (aim its thrust up and down).

The Su-57 and Su-35 of the Russian Air Force, on the other hand, operate full 360-degree thrust vectoring, granting even greater mobility as the jets can point in any direction.

While this may seem like a significant advantage, the real benefits of thrust vector control are subject to a great deal of debate. America’s air warfare doctrine doesn’t place a lot of emphasis on dogfights, preferring instead to leverage low-observable aircraft and over-the-horizon munitions to take out the opponent before they ever know you’re there.

Using thrust vector control to quickly change direction also scrubs a great deal of airspeed, leaving the fighter vulnerable to attack from any other aircraft or air defense systems in the area, prompting many pilots to see such maneuvers as a sub-optimal tactic in most combat situations. Of course, in a large-scale conflict, it’s hard to say if America’s sniper approach to dogfighting will really work against other stealth jets, or if Russia’s preferred method of treating a dogfight like a boxing match may ultimately win the day.

According to official statements, Russia’s new stealth fighter will be optionally manned–or in other words, capable of flying with or without an operator on board. While this may sound like cutting-edge technology, it really only is if the aircraft can perform complex tasks while flying with an empty cockpit. It’s also important to note that the Su-57 has also been characterized as “optionally manned” by officials in the past, but that capability has yet to be demonstrated.

The U.S. military has already demonstrated the ability to use computers to land fighters on carriers or even to convert traditionally crewed platforms into near-autonomous drones. In fact, the U.S. has been turning old fighters into target drones that fly without a pilot for years.

It’s possible, then, that this new fighter may be optionally manned in that it could be capable of ferry flights, or flying between duty stations for logistic or administrated reasons, without the need for a pilot onboard. If that’s the case, it may be operated remotely by qualified pilots (similar to America’s MQ-9 Reaper), or it may use software to handle the controls.

While Russia does have the S-70 subsonic low observable UCAV in development, Russia has traditionally been behind the curve in terms of drone tech. So it’s unlikely that we’ll see this new jet performing any real stunts without a human at the stick.

Related: RUSSIA IS TESTING THEIR OWN ‘LOYAL WINGMAN’ FOR THE SU-57

Russia has consistently lagged behind the international competition in the stealth category, due in large part to the nation’s industrial base lacking the ability to achieve the incredibly tight production tolerances required of a stealth platform. Building stealth aircraft is extremely difficult and expensive, and while the U.S. has been doing it since the first F-117 rolled out of Lockheed’s Skunk Works in 1981, Russia is still a relative newcomer to the game.

The Su-57 is often characterized as the least stealthy 5th-generation fighter on the planet, ranking behind America’s F-22 and F-35 as well as China’s Chengdu J-20. However, this is where discussion about doctrine once again comes into play. The United States prefers to lean heavily on its stealth technology, preferring to be sneaky over powerful. Russia, either by design or due to its production limitations, doesn’t look at stealth in the same way. Stealth isn’t the make-or-break element of a fighter design for the Russians. Instead, it’s treated like another capability, in the same vein as thrust vector control.

However, the Su-57’s production tolerances have seemed to improve over time, and it’s almost inevitable that a new stealth design will outperform the old one. The Su-57 design is already more than a decade old and Russia has certainly learned a few tricks throughout its development and production process.