Where Are Countries Getting the Money to Deal With Coronavirus? 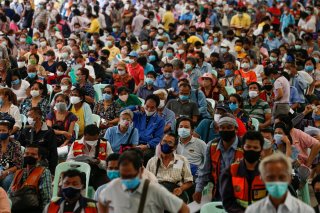 The management of the COVID-19 pandemic has resulted in tough public policy measures around the globe, including lockdowns aimed at reducing human interaction to a minimum. These measures, which have put a stop to big chunks of economic activity, have come with devastating consequences, forcing business to lay off tens of millions of workers globally.

To mitigate the social and economic impacts, governments have had to dig deep into their finances that in some instances were already under strain. These are over and above the resources that governments need to pump into their health systems as they battle the pandemic. This additional expenditure comes at a time when the shutdown of economic activity has reduced tax collection, placing further strain on the public purse.

The Conversation has brought together analyses of these issues by its network of experts. In this round up we pulled together some of the articles from the week that was. They cover national budgets in the time of COVID-19, how remote working is worsening inequality, the pandemic’s after affects on inflation, rising unemployment, and the likelihood of a higher debt burden on future generations.

What various countries are doing

Meanwhile, Alan Shipman cautions about the dangers of a further decline on consumer price inflation. When consumers sense that prices are going to continue falling, they put off expenditure on non-essential purchases, hoping to pick them up later at an even lower price. Such behaviour obviously leads to a decline in consumer spending, one of the major drivers of economic activity.

Get the latest news and advice on COVID-19, direct from the experts in your inbox. Join hundreds of thousands who trust experts by subscribing to our newsletter.