Where the Government Stumbles with Coronavirus, Litigation Steps In 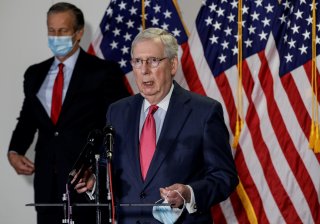 Democrats have balked, with House Speaker Nancy Pelosi saying they “have no interest in diminishing protections for employees and customers.”

Superficially, this standoff seems like another example of Washington’s toxic politics, where hope for any legislation rests on crass political trades among bickering partisan factions.

Our research, though, indicates there’s more to this struggle than just partisan politics. American ambivalence about government has left litigation to play an outsized role in responding to crises like this one. Including protections for businesses against lawsuits alongside a new aid package might make sense.

Health disasters in the United States – the opioid epidemic, the diseases caused by tobacco use, lead paint, asbestos, Agent Orange and many others – often generate a surge of court cases.

But research shows that litigation is an expensive, haphazard way to handle injury claims. Legal action can drive some businesses into bankruptcy while leaving many victims without the money and damages they sought. Studies of the personal injury system suggest that for every dollar the injured recover, another dollar is spent on lawyers and lawyering.

Although only a small number of cases have been filed so far, the coronavirus pandemic seems likely to replicate this pattern.

At this early stage, class action lawsuits are pending against cruise ships on the grounds that they negligently exposed passengers to the virus and, in some cases, prevented them from seeking treatment. Prisons and nursing homes, where many have died as a result of COVID-19, face similar suits.

And personal injury lawsuits are only one type of litigation related to COVID-19. Employers are concerned about potential liability for bringing workers back too soon, while others are already facing suits over wages, worker safety protections, pensions, privacy, and disability accommodations and discrimination claims.

Consumers are suing airlines, colleges and universities, ticketing agencies and others for refunds. Bankruptcies – another kind of litigation – are reportedly on the rise, and many more will surely follow, as businesses collapse under the weight of stay-at-home orders and people with no or limited insurance face crushing medical bills.

While conservatives like McConnell and his fellow party members have legitimate concerns about the potential costs of litigation, they’re wrong about why litigation happens in the first place. They tend to attribute surges of litigation to a kind of character defect: Americans, they contend, have become whiny victims who, urged on by greedy lawyers, sue at every opportunity.

Scholars, however, question whether Americans are more innately litigious than citizens of other affluent countries. They point instead to a fundamental tension in American politics that gives courts an unusually prominent role in public policy.

On one hand, Americans want protections against pervasive social problems, such as environmental harms, unsafe products and sudden economic downturns.

On the other hand, many Americans are skeptical of the typical response of most nations to such problems: a larger welfare and regulatory state.

And even when a majority of Americans favor expanding government, our fragmented lawmaking process, in which bills must pass through multiple committees and two chambers of Congress and be signed by the president, provide repeated opportunities for special interest groups to block sweeping reforms.

This leaves those in distress to pursue help where they can find it, in the legal system.

Consider the asbestos crisis. Asbestos is a “magic mineral,” which is flexible enough to be woven into cloth yet stronger than steel. After World War II, manufacturers used it in everything from hair driers to automobile brakes to ship boilers.

The problem is that exposure to asbestos can be deadly, causing fatal diseases such as asbestosis, a progressive scarring of the lungs that slowly strangulates its victims, and mesothelioma, a fast-acting cancer of the linings of the lungs.

Contrary to the myth of litigiousness, American workers exposed to asbestos did not immediately sue when they starting falling ill in growing numbers in the late 1960s.

Instead, they filed claims with state workers’ compensation programs for lost wages and help with their medical bills. When these programs provided very limited relief, they turned to lawyers, who found new ways to hold companies liable for the failure to warn their workers about the dangers of their products.

Over the next few decades, asbestos litigation skyrocketed. By the early 2000s, Americans had filed an estimated 730,000 claims for damages associated with their illnesses and to punish companies for their reckless conduct. Those claims have bankrupted scores of businesses while providing victims slow and erratic payments. The final price tag could reach an estimated US$325 billion in today’s dollars.

The Netherlands offers an instructive contrast. Dutch workers suffered from asbestos-related diseases at five to 10 times the rate of American workers.

Dutch workers had little incentive to sue, because they were guaranteed relatively generous health and unemployment benefits from the government that would be deducted from any recovery in the courts.

The asbestos example underscores an implicit trade in the American approach to social problems that leaves both Republicans and Democrats unsatisfied: less “government” but more litigation.

It is the same trade that leaves Republicans railing against medical malpractice lawsuits while Democrats decry the lack of universal health insurance.

The coronavirus pandemic, like other health disasters, has revealed the downsides of this trade for both businesses and households. Businesses, already under financial strain from the pandemic, worry that the trickle of lawsuits that has already begun will turn into a torrent. Displaced workers lack adequate health care insurance and have no guarantee they will be protected from poverty when their unemployment benefits run out.

This brings us back to the congressional standoff. Congress could clarify the responsibilities of businesses, creating a safe harbor from lawsuits: If businesses adopt model sanitation and social distancing measures and provide workers with protective equipment, they could not be sued on the grounds that these procedures were inadequate. In exchange, the aid package should ensure that workers’ lost wages and medical costs associated with the pandemic are fully covered.

This would not be a cynical partisan deal. It would be an exchange of remedies, replacing some forms of litigation, which have often proved expensive and unreliable mechanisms for protecting workers and consumers, with direct support for those whose health and livelihoods have been devastated.

If properly structured, such a deal would offer more aid for victims of the coronavirus and more legal certainty for businesses seeking to reopen. That would be a win for both sides – and a step away from depending so much on courts to respond to disasters like this pandemic.