Where There's the U.S. Military, There's a B-52 Bomber 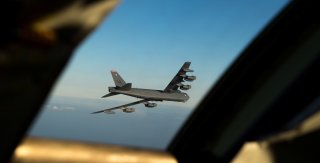 Here's What You Need to Remember: These BTFs provide a persistent, long-term bomber presence around the globe.

The Air Force has noted that bomber task force deployments have been a regular occurrence since 2014, and these provide U.S. Strategic Command an opportunity to evaluate and improve the readiness of strategic assets within the Indo-Pacific region. These BTFs provide a persistent, long-term bomber presence around the globe.

This article first appeared in 2021, and is being reposted due to reader interest.