Which U.S. Weapons Have the Greatest Longevity? 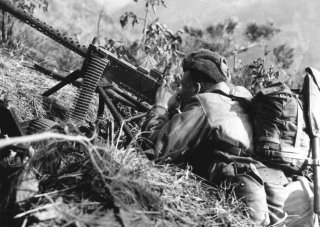 Here's What to Remember:  Some of the guns used today have been around for a long time!

It’s fascinating how long a firearm design sticks around with the United States military. In a digital world, it’s easy to forget that firearms technology tends to move a lot slower than the world of electronics, aviation, or even warship construction. As a country, we have the most capable and most advanced military in the world with the R&D budget we need to stay at the forefront of weapons technology. But when we find a design that works, we tend to stick to it. Today we are celebrating the longest-serving service weapons in America’s arsenal.

Longest-serving service weapons and the rules

The rules are easy. First and foremost, the weapon’s lifespan ends when it leaves the general service. So, while the M14 has stuck around with the Navy to this very day for shooting lines from ship to ship, I’m not including it on this list. When I say lifespan, I mean the lifespan of the weapon used by the general military, and not in specialized roles or with special operations troops.

That may ruffle somebody’s feathers out there, but the rules are the rules.

The M1919 machine gun lasted way longer than it should have. It served from 1919 (as you may have guessed) right up into Vietnam. You can find pictures from the 1960s showing Marines laying down cover fire with their M1919A6s. That’s pretty incredible for a service weapon that started life as a World War I-era machine gun. And just as you’d expect from such a weapon — it’s huge, heavy, and boxy.

Over time, the military found ways to cut weight and turn it into an ad-hoc squad support weapon. In World War II, the M1919 went from an emplaced machine gun to the 1919A4 and A6 models, which became early Squad Automatic Weapons.

The weapon even stuck around after the M60 became the general-purpose machine gun of choice for American GIs.

The M1919 stands out among America’s longest-serving service weapons because… it really shouldn’t have been. The Marine Corps and the Navy seemed to cling to them well into Vietnam, which means it served for at least 47 years, but there were better options for a good chunk of that time. Believe it or not, outside of the United States, the M1919 still serves in some militaries thanks to its long-proven robustness.

Related: The 7 best service weapon nicknames of the US military

Speaking of World War 1 service weapons, the Winchester M1897 also lasted a very long time. In Marine Corps boot camp, the term stanchion recruit applies to a recruit who keeps a low profile and doesn’t excel or fail. Shotguns are stanchion recruits. They’re niche weapons and they tend to have long service lives because, well, they last. And the Winchester M1897 is a perfect example to prove my point.

This hammer-fired shotgun famously served in the trenches of World War 1 and stayed in service rotation right up into Vietnam. Well, officially the end of its service life was 1957, but the M1897 came out of retirement for Vietnam.

It turns out that shotguns work well in jungles, and the United States didn’t have enough of them. So, they dusted the old M1897 off and started handing them out.

That gives it a service life of 73 years, at the very least. Not too bad for a shotgun designed in 1897. The old trench gun lasted quite some time and performed admirably for such an old shotgun.

Related: The Infantry Automatic Rifle is nothing new

Marines often stick with what works, and the M40 sniper rifle works! In 1966, the Marine Corps put together a comprehensive sniper program, and the Remington 700 became the rifle of choice. They designated the rifle we now know as the M40, and since then, it’s been the ‘long gun’ of choice for the Marine Corps HOGs. (Editor’s Note: HOG is a Marine Sniper acronym that means Hunter of Gunmen.)

In the last decade or so, the Marine Corps moved to primarily semi-automatic sniper rifles, but the M40 stuck around and adapted to be an accurate and modular platform right into the 21st century. The M40A6 and M40A7 provide the most precision possible with the 7.62 NATO round while maintaining modularity and compatibility with modern sighting systems.

The M40’s one of the longest-serving sniper rifles with 55 years of good service under its belt. With the preference for semi-autos in 7.62 NATO and bolt guns in 300 Win Mag and .338 Lapua, the M40 might be nearing the end of its service life, but it hasn’t heard the bell just yet.

Related: The 4 guns used to make the longest sniper kills in history

The M16 family of rifles

The M16 series of rifles started their enlistment in 1964, and are still serving their country as its main infantry rifle to this very day. The U.S. Army, Marine Corps, Navy, and Air Force all utilize the M16. While the Marines have replacedthe M16 series for combat arms, the majority of forces are using an M16 series rifle. When I say the M16 series, I include the M16, the CAR-15s, the Mk 18, the M4, and so on. This is one rifle platform that comes in many flavors. The M16 provided us with the best service rifle America had ever seen when it arrived on the scene. It’s lightweight, easy to shoot, accurate, reliable, capable, and easy enough to repair. Not to mention the fact that you’d be hard-pressed to find a more versatile service rifle platform to build from. That’s the reason it’s a family of rifles. It can be long, short, and rechambered to various calibers and still have a seat at the M16’s Thanksgiving Dinner table. The M16 is not only one of our longest serving service weapons, but it’s likely going to keep adding to its tenure for many years to come.

Related: These are the rifles the Army tried to replace the M16 with

I’ve got to give it up to the United States Military’s steadfast faith in its own decisions. When they chose their first automatic pistol, they stuck with it. The M1911 handgun takes the cake for the longest-serving service handgun in American history. Even the name M1911 comes from the fact the weapon was adopted in 1911.

It served through two World Wars, Korea, Vietnam, and all the little skirmishes in between. The M1911 is a semi-automatic handgun that fires the .45 ACP round from a single stack magazine. John Browning designed the weapon, which means he’s designed four of the weapons on this list! The man’s weapons have staying power!

The M1911 was replaced by the M9 in 1985 but stuck around in Special Operations roles. Heck, even to this day, Marine Force Recon units utilize the M1911 MEUSOC pistols. Although by our rules, that doesn’t count. The weapon served for 74 long years before going out of fashion with the conventional force.

The M2 machine gun is America’s .50 caliber machine gun of choice. This massive behemoth has served for 88 years and continues to serve to this day!

This (surprise!) John Browning design utilizes the .50 BMG round and, in many ways, resembles the operation of the M1917 machine gun. This absurdly powerful weapon sits on trucks, tanks, and as an emplaced weapon for defensive positions.

The M2 was first designed in 1918, and the original intent was for it to be an anti-tank machine gun. World War 1 tank armor was quite a bit different than today’s, and the .50 BMG was an effective round for the job.

Today, the ol’ M2 machine gun still serves with general infantry forces, special ops, and foreign forces. In fact, it remains a favorite among many service members regardless of flag.

It’s not the newest gun, but it works and works well for thousands and thousands of rounds. I used one extensively in my time as a machine gunner and enjoyed every round I ever fired.

My wildcard choice. It breaks the rules, of course, but that’s what wildcards do. The Mameluke sword was first adopted by Marines after First Lieutenant Presley O’Bannon received one from the viceroy of the Ottoman Empire. In 1825, Commandant Archibald Henderson adopted the sword for Marine officers, and it’s still worn to this day.

As such, it’s the longest-serving weapon with 196 years under its belt.

Every weapon on this list is at least a grandpa in terms of age and experience. These weapons served their country well, and some still do. It’s amazing how long a good piece of kit can last, and it’s even more amazing to see what troops can do in the field with a piece of kit that was good once… but may not be quite up to snuff anymore.