Which World War II Tanks Were the Deadliest? 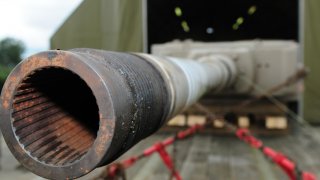 Here's WHat You Need To Remember: The tanks of the past are not just historical curiosities—they all have lessons for today. Even the failures.

Image: ROYAL AIR FORCE ALCONBURY, England – The turret of a Tiger 1, a World War II era German tank, is secured to be moved to RAF Lakenheath July 9, 2012. The Tiger 1, one of six left in the world, will be shipped to the U.S. Army Armor and Cavalry Museum at Fort Benning, Ga., for repair and full restoration. (U.S. Air Force photo by Airman 1st Class Cory D. Payne)