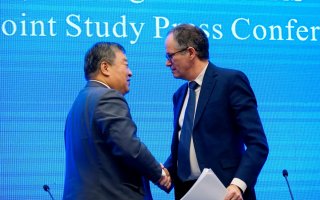 The WHO’s findings after their probe into COVID’s origins in Wuhan are rightly making a stir — not because of any credible insights, but because of the implausible public relations win it represents for Beijing.

As Javier Hernandez of The New York Times reports:

“W.H.O. experts on Tuesday delivered praise for Chinese officials and endorsed critical parts of their narrative, including some that have been contentious. The W.H.O. team opened the door to a theory embraced by Chinese officials, saying it was possible the virus might have spread to humans through shipments of frozen food, an idea that has gained little traction with scientists outside China.”

Hernandez speaks with journalistic norms that apparently require an internationally prominent news outlet to report statements by a prestigious UN body with a straight face, even when the reporter knows better.

But in cases such as these, when a tyrannical power brazenly leeches off the authority of a large multilateral institution, a clearer picture of what is going on is often found from more grassroots reporting.

Consider the China vlogger Matthew Tye, or Laowhy86, who speaks with the refreshing directness of one who was initially swept up in the excitement of China’s economic boom, only to find a ubiquitous system of deceit, moral bankruptcy, and malign intent flowing from the CCP. Tye lived in China for over a decade — buying a house and starting a family — only to watch society slip further and further into the grip of dictatorship, before returning to the United States.

Back when COVID was still an obscure, emerging concern in Wuhan with only 700 total confirmed cases, Tye had no illusions. Drawing parallels to China’s 2003 SARS cover-up and the government’s suppression of information around the 2008 Sichuan earthquake, he correctly discerned that China’s response to COVID was already mangled, misreported, and likely to snowball out of control.

As COVID went global, Tye focused on tracing China’s concerted cover-up attempts and explained the dangers of trusting China’s reportage from an early stage. In the wake of the WHO’s probe, he pulled no punches:

“Would it surprise you that after a year — one year — after the outbreak happened in Wuhan, the WHO was finally allowed into the [Wuhan Institute of Virology] Labs to find out what was going on? After one year, they weren’t able to come up with anything. Kind of weird, isn’t it?”

Paraphrasing a BBC journalist, Tye notes, “Isn’t it a little suspicious that you guys [the WHO investigation team] said it wasn’t from the [Wuhan Institute of Virology] Laboratory before you guys even went to the Laboratory?”

On the topic of the frozen-seafood-transmission hypothesis peddled by the CCP, Tye exclaims that the WHO is:

“literally playing into all of the bullshit theories that China had thrown out there to try to divert attention away from Wuhan … I just don’t understand how the WHO, in their initial investigations, or in their initial interviews, don’t say, ‘Well it is kind of odd that we had to wait an entire year to go into the [Wuhan Institute of Virology] Lab’ … That’s not even a talking point. It’s just that ‘We’ve dismissed this as a theory, it’s extremely unlikely that this came from the laboratory, although the laboratory was working on bat-derived coronaviruses. … They [the WHO] expect the whole world not to be furious at them for treating them like idiotic children.’”

Of course, evidence remains inconclusive on the actual origins of COVID. But at a time when international authorities are clearly kowtowing to Beijing on a matter as consequential as the origins of COVID-19, more straight-talk is necessary. There are limits to the plausible.

As one friend and post-Soviet doctor now fighting COVID in the US recently said to us, “Einstein once said ‘Insanity is doing the same thing over and over again and expecting different results.’ After last year’s disaster I would not expect the WHO to teach us anything new. They are a party to this world crime. They can’t be [its] judges.”