Who is the Greatest Threat to World Peace in 2022? 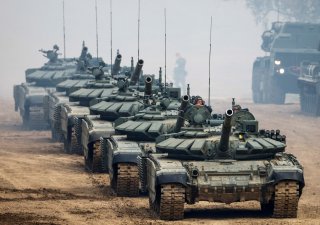 As 2021 dragged to an exhausting end, the international strategic outlook remained bleak.

Authoritarian regimes are threatening conflict in Europe, the Middle East and Asia. The key democracies look distracted, internally riven and unwilling to defend the global order they originally designed.

It wasn’t meant to be this way. The formal dissolution of the Soviet Union on 26 December 1991 was supposed to usher in an era where liberal democracies would flourish. Instead, 2022 may be the year in which democracies operating in a rules-based international order will face their toughest test.

After several decades where Western military forces focused their efforts on largely unsuccessful counterterrorism and counterinsurgency operations in the Middle East, we face the alarming prospect of state-on-state conventional conflict in several regional trouble spots.

Russia’s massive build-up of military forces on the borders with Ukraine and Belarus creates the potential for serious conflict during the next few months. A full-scale invasion of Ukraine past the contested eastern provinces would be the most catastrophic but perhaps least likely outcome.

More likely scenarios include Russia overtly moving forces into Ukraine’s Donbas region, which has been controlled by Moscow since the 2014 invasion using local proxy forces and covert Russian military.

Russian President Vladimir Putin then might seek to establish a land bridge between Donbas and Russian-occupied Crimea, widening a front from which Russia could attack deeper into Ukraine.

Putin also could also deploy forces into client-state Belarus, threatening the Ukrainian capital Kyiv from the north, but also putting Russian forces directly on the border with Poland, Lithuania and Latvia.

At this stage, the US and NATO have no appetite for a military response. In early December, US President Joe Biden told Putin in a virtual meeting that, ‘if Russia further invades Ukraine, the United States and our European allies would respond with strong economic measures’.

Beyond that, there were vague promises to provide ‘additional defensive materiel to the Ukrainians’ and fortify eastern NATO allies. Putin has largely been given a green light for military operations and Biden has kept a low profile on the issue for weeks.

This month, the US, NATO and Russia will negotiate on demands from Putin that, if agreed, would severely constrain America’s capacity to defend Europe and would strengthen the position of Russia’s more proximate forces. The US can’t accept Putin’s demands but also won’t offer more than token military support to Ukraine. February may be the month when Russian military operations commence.

What lessons could Chinese leader Xi Jinping take from Putin’s high-risk military posturing? The Beijing Winter Olympics will end in late February. With that charm offensive over, we should expect that Xi will redouble the Chinese Communist Party’s attempts to assert its control over Taiwan and its longer-term goal for strategic dominance in Asia.

China and Russia have become increasingly close since the Russian takeover of Crimea in 2014 and Beijing’s annexation of much of the South China Sea by island building to establish military bases in the same year.

Xi is copying Putin’s international playbook. Both leaders take big international risks—consider Russia’s military intervention in Syria and China’s authoritarian crackdown in Hong Kong—both have championed vast and rapid military build-ups, and both threaten the use of military force to press for Western acquiescence.

Frankly, the strategy is working. Ukraine matters more to Russia than it does to the US and Western Europe. The South China Sea matters more to Beijing than it did to Washington, at least in 2014. Autocratic bluff and brinkmanship can and do produce democratic backdowns.

Imagine a 2022 scenario where Beijing closes the Taiwan Strait to sea traffic and declares the East and South China seas no-fly zones because they are ‘sovereign Chinese territory’. Xi could then build up a huge air and amphibious assault force on the Chinese coast adjacent to Taiwan.

Beijing could activate a propaganda campaign and its own agents in Taiwan, calling for the ‘reunification’ of the rebel province under CCP control and claiming that the US is threatening China’s security by providing military assistance to Taipei.

This would be a Chinese replay of Putin’s tactics over the Ukraine. What would Biden do? If the US response was to threaten economic sanctions but leave military action off the table, Xi could well conclude that ‘reunification’ of Taiwan with China by bluff and coercion is worth trying.

The analogy breaks down because Taiwan is more central to the core of Asian security than Ukraine is to Western Europe. Taiwan under CCP control is an existential threat to the security of Japan and to America’s military dominance of the Pacific. By contrast, Russian control of Belarus and eastern Ukraine adds to NATO’s problems but is not a strategic game-changer.

Here are two more strategic woes likely to unfold this year. North Korea is facing a crisis of domestic economic collapse brought on by international sanctions because of its nuclear-weapon and missile development.

Kim Jong-un’s erratic leadership was marked last year by unexplained disappearances and weight loss that could be linked to serious health issues. A challenge to his leadership would have profound consequences for the stability of the regime.

North Korea manages crises by trying to export them. Expect further missile and nuclear tests designed to extract sanctions softening from the US.

In our nearer region, Solomon Islands Prime Minister Manasseh Sogavare will continue to lead his country to the brink of disaster by building ties of dependence with Beijing. The proposed Chinese police presence won’t be the last concession China will seek from Sogavare in return for bankrolling his government.

You know Canberra has a real problem on its hands when the political leadership goes quiet. Of course, this is a matter for the Solomons government, but Australia will have no intention of allowing a Chinese proxy to emerge in the Coral Sea. Think back to 1941. This is a game-changer to our security.

This article was first published by The Strategist.

Peter Jennings is the executive director of ASPI and a former deputy secretary for strategy in the Defence Department. A version of this article was published in The Australian.