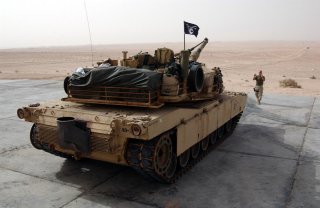 Here's What You Need to Remember: It should be noted that replacing or even developing a new M1A3 variant is not a high priority for the U.S. Army. The Army is being drawn down after the U.S. ground forces were pulled from Iraq and Afghanistan, and with the focus on the Pacific theatre, the service is looking for ways to carve out its niche.

Developed in the 1970s, the Abrams main battle tank has been the mainstay of the U.S. Army’s armored forces for 35 years. In the decades since the M1 entered service, the tank has been upgraded many times—receiving a new 120mm gun to replace the original 105mm weapon and ever-improving armor. Internally, the tank is barely recognizable as the latest M1A2 SEP v.2 machines are completely digital and networked. The U.S. Army is also eventually planning to develop a new variant called the M1A3 that will greatly improve the venerable tank and try to decrease its ever-increasing weight—a consequence of the many upgrades.

Meanwhile, tank development has not stood still in other parts of the world. The Soviet Union may be long gone and there is no longer the threat of a massive Red Army onslaught coming through the Fulda Gap in Germany, but Russia has continued to develop its tanks—the latest operational incarnation is the formidable T-90 main battle tank. Nonetheless, main battle tanks aren’t really the priority they used to be for most Western powers.

The T-90 is a development of the older T-72, which the Russian government decided to settle on after the more sophisticated T-80 proved to be a disaster during the wars in Chechnya. The T-90 is essentially a T-72 upgraded with the more advanced systems found on the T-80U, but ditches the T-80’s troublesome gas turbine engine. Instead, the most common version of the T-90 uses a 1000hp diesel engine—which gives it a somewhat less than ideal power-to-weight ratio. The T-90 adds a new laminated armor package, explosive reactive armor and an electronic countermeasures suite. It retains the standard 125mm gun. Overall, it’s a pretty formidable tank—a significant improvement over previous Russian tanks.

On a one-for-one basis, the M1A2 is still a superior design—but it’s also a lot more expensive. U.S. armor doctrine places a premium on seeing the enemy first and getting the first shot to ensure victory—a result of decades worth of analysis. The Abrams is designed around that concept.

In a tank-versus-tank fight, the M1’s advantages lie in its advanced sensor and fire-control suite, ever-improving depleted uranium armor matrix and the hitting power of its M829 sabot rounds. The latest and much improved M829E4 entered into production this July. This latest iteration of the M829—which is often credited with the ease the U.S. Army chewed through Iraqi armor in the first Gulf War—greatly increases the lethality of the Abrams’ M256 120mm cannon.

The M1A2 SEP v.2 is continually being improved—research and development work is focused on networking, mobility and protection according to Army’s FY16 budget submission.

Meanwhile, full-scale development of the M1A3 is expected to start in a few years and will improve almost every aspect of the Abrams. The new Abrams derivative should be significantly lighter and more mobile while also increasing its armor protection. It will also feature much improved computer systems and sensors.

It should be noted that replacing or even developing a new M1A3 variant is not a high priority for the U.S. Army. The Army is being drawn down after the U.S. ground forces were pulled from Iraq and Afghanistan, and with the focus on the Pacific theatre, the service is looking for ways to carve out its niche. Even with Russia’s actions in Ukraine, no one seriously expects the United States to engage in another large conventional land war in the foreseeable future. Thus, the most likely scenario for U.S. forces to run into something like a T-90 might be in some kind of hybrid war and there might be more cost effective ways to deal with isolated pockets of enemy armor.