Why Is Accountability for Alleged War Crimes So Hard To Achieve in The Israel-Palestinian Conflict? 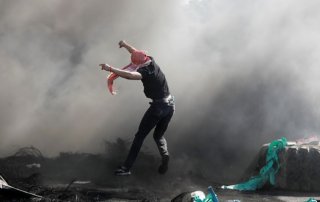 Hamas is firing rockets into Israel from Gaza. Some cause casualties, while many are intercepted by Israeli anti-missile systems or fall short of the border. Israel is conducting aerial and artillery bombardment of Palestinian targets. In recent days, it has destroyed a building that housed the Associated Press and Al Jazeera offices in Gaza, and levelled multiple Palestinian homes.

The conflict is the most intense outbreak of violence since the 2014 Israel-Gaza war. Prime Minister Benjamin Netanyahu said Israel will do “whatever it takes to restore order and quiet” and this could take some time.

Even though the International Criminal Court’s chief prosecutor opened an investigation into alleged war crimes in the conflict two months ago — and is closely watching the current violence for potential crimes — legal accountability will likely remain elusive.

Palestine’s status in the international community

Statehood is the preeminent status of an entity under international law. It grants the fullest range of rights and carries key assumptions, including freedom from interference with territorial integrity.

Israel declared statehood in 1948 and was admitted as a UN member state in 1949. Its statehood — combined with its abiding US alliance — has given it significant protection from external intervention.

Palestine, in contrast, claims a right to statehood but lacks effective statehood. The international legal position is clear — the Palestinian people are entitled to self-determination and statehood but they have been living under Israel’s occupation since 1967.

On this basis, in 2012, Palestine’s UN standing was upgraded to the special status of “non-member observer state”. Although the majority of UN General Assembly members expressed their hope this would lead to actual statehood for Palestine, a two-state solution to the conflict appears less likely as time goes on.

The UN Security Council is charged with promoting and preserving international peace and security. It has frequently addressed the conflict involving Israel and Palestine in the past.

The Security Council met in an emergency session on Sunday, with UN Secretary-General António Guterres calling for an immediate ceasefire and warning of “an uncontainable security and humanitarian crisis”. Over 38,000 Palestinians are internally displaced in the Gaza Strip following the recent surge in hostilities.

The council took no action in this special session. The US, one of five permanent members with veto power, has a track record of resisting action in relation to Israel. China’s Foreign Minister Wang Yi said it was regrettable the US was blocking the council from making a statement with “one voice”.

US officials are maintaining their position that Israel is exercising its right to self-defence against Hamas terror attacks.

This conflict comes in the wake of a significant development in international criminal law. In 2015, Palestine acceded to the Rome Statute that established the International Criminal Court (ICC). Palestine also accepted ICC jurisdiction over alleged crimes committed in its territory since June 2014.

In February, the ICC determined its jurisdiction extended to the Occupied Palestinian Territories. Its office of the prosecutor then initiated an investigation into the “situation in Palestine”. Prosecutor Fatou Bensouda said her office would seek justice for crimes committed against Palestinian and Israeli victims.

The ICC exists to prosecute the gravest crimes against humanity and war crimes. Israel has been accused of war crimes in Palestine, including wilful unlawful killings and disproportionate military attacks causing unnecessary civilian casualties.

Human Rights Watch alleges Israel is also engaged in crimes against humanity in the form of apartheid and persecution.

The ICC probe will likely encompass the 2014 war, border clashes in 2018, and Israeli settlement activities in the West Bank. It will also examine whether Hamas and other groups in Gaza have committed war crimes by firing rockets at Israel.

Accountability for international crimes is complicated for non-state actors like Hamas. Indiscriminate attacks on civilian targets undoubtedly violate the laws of war. Yet, Hamas is not acting on behalf of a Palestinian state, nor does the Palestinian Authority have the capacity to halt its actions.

As for Israel, the American alliance has been a constant obstacle to accountability. However, some important trends are emerging within American Jewish communities and the Democratic Party.

Some prominent Democratic politicians now publicly oppose the position that Israel’s right to self-defence must be asserted by the US, regardless of whether its military actions are proportionate. Senator Bernie Sanders wrote this week:

the fact of the matter is that Israel remains the one sovereign authority in the land of Israel and Palestine, and rather than preparing for peace and justice, it has been entrenching its unequal and undemocratic control.

Prominent progressive congresswoman Alexandria Ocasio-Cortez also asked why the US could not stand up to Israel, which she called an “apartheid state”.

The ICC investigation certainly opens a new and legally intriguing avenue. But previous efforts at truth and peace-building indicate little cause for hope.

President Joe Biden, for one, has a long-established position in favour of Israel’s right to defend itself.

Israel is also not a member of the ICC and rejects the court’s jurisdiction over its territory and nationals.

The long war persists. International law — hamstrung by its own institutions, entrenched power relations and politicisation — offers no clear or quick solution.