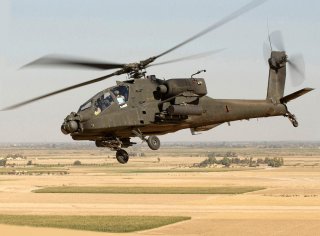 Here's What You Need to Remember: The latest AH-64E Guardian model boasts uprated engines, remote drone-control capabilities, and a sensors designed to highlight muzzle flashes on the battlefield below. The Army has also experimentally deployed Apaches on U.S. Navy ships and had them practice anti-ship missions, and even tested a laser-armed Apache.