Why the Air Force is Committed to Buying the F-15EX 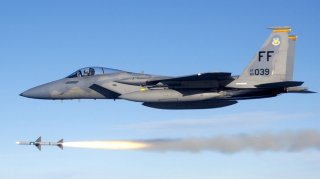 The U.S. Air Force is now poised to begin purchases of Boeing’s new and improved F-15EX, a fourth generation platform that has drawn its fair share of controversy in recent months. This purchase will mark the first time the Air Force has purchased an F-15 in more than 20 years, prompting some critics to question the logic behind investing hundreds of millions of dollars into an old workhorse in this era of advanced stealth technology.

At around the same price-per-plane as Lockheed Martin’s F-35 Joint Strike Fighter, the Air Force’s decision to purchase new “old” F-15s may seem odd indeed–but there’s more to this decision to consider than initial costs alone.

The United States currently maintains a fleet of around 230 F-15s in various trims (C/D). These jets represent the crux of America’s fourth generation air intercept fighters. America purchased many of these aircraft starting in 1979, making them extremely old by comparison to technological marvels like the F-35 Joint Strike Fighter. However, despite America putting an end to F-15 orders decades ago, America’s allies in nations like Saudi Arabia and Qatar have continued to invest in the platform, funding significant upgrades and updates for subsequent fighter purchases over the years. All told, these nations have invested over $5 billion for improvements in the jet.

The end result is a new and improved F-15 jam packed with the latest aviation tech, without any of the associated research and development costs. This new F-15 (dubbed the F-15EX) boasts updated cockpit systems, an enhanced sensor suite and data fusion capabilities, and the ability to carry up to 29,500 pounds of ordnance split into 12 air-to-air hard points or 15 air-to-ground hard points. It’s new twin engines aren’t just more efficient, they’re also more powerful, making the fastest fighter in America’s inventory even faster.

Many critics of the F-15EX program have a habit of comparing the fighter to America’s advanced F-35 Joint Strike Fighter, and to be fair, the F-35 is indeed a more capable multi-role platform. The thing is, comparing these two jets is sort of like comparing a top fuel dragster to a Formula 1 Indy car. Sure, they’re both technically cars, but they were designed to do very different things.

The F-35 Joint Strike Fighter was built to follow in the F-16 Fighting Falcon’s footsteps as a capable multi-role fighter that places an emphasis on air-to-ground engagements in highly contested airspace. That’s why the F-35 can only carry four bombs or missiles while flying stealth missions–so it can maintain a tiny radar profile and avoid detection or targeting. The F-15, on the other hand, is a purpose built air superiority fighter intended to do battle with other fighters in the sky. The F-22 Raptor, not the F-35 Joint Strike Fighter, can be seen as the next technology step in this role, but because the F-22 program was shut down only about halfway through its production run, the United States is purchasing new F-15s to fill the roles currently occupied by dated F-15s and our limited supply of F-22s.

Not every mission needs a stealth fighter

The biggest complaint about the F-15EX is that we could be using the money allocated to Boeing for these jets to purchase more F-35s, but that argument has a couple significant flaws. While the F-35 Joint Strike Fighter is a more capable platform, it’s also far more expensive to operate, more difficult to repair, and still has a number of issues Lockheed Martin is continuing to iron out. The Air Force is already working with Lockheed Martin to find ways to reduce the operating costs of the F-35 because the Air Force is genuinely concerned that once all of their orders have been filled, they won’t be able to afford to keep them all flying.

The F-15EX, on the other hand, is expected to have a mind-boggling 20,000 hour lifespan and may end up costing around half as much as the F-35 to operate by the hour. In uncontested airspace where the F-35’s stealth isn’t of use, it makes sense to employ cheaper fourth generation jets like the F-15, F-16, and F/A-18 that can carry far more ordnance into the fight and won’t break the bank.