Why America Needs a Vaccine Corps of Medical & Nursing Students 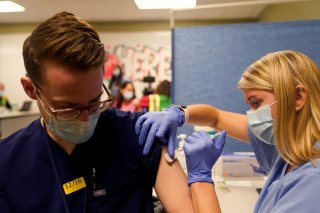 The U.S. faces one of the most consequential public health campaigns in history right now: to vaccinate the population against COVID-19 and, especially, to get shots into the arms of people who cannot easily navigate getting vaccinated on their own.

Time is of the essence. As new, potentially more dangerous variants of this coronavirus spread to new regions, widespread vaccination is one of the most powerful and effective ways to slow, if not stop, the virus’s spread.

We’re testing that concept right now at the University of Massachusetts Medical School, where I am the chancellor. So far, 500 of our students and hundreds of community members have volunteered for vaccine corps roles. Our graduate nursing and medical students, under the direction of local public health leaders, have already been vaccinating first responders and vulnerable populations, demonstrating that a vaccine corps can be a force multiplier for resource-strained departments of public health.

On Feb. 16, we will help to launch a large-scale vaccination site in Worcester, where as many as 2,000 people could be inoculated per day.

Importantly, a large vaccination corps that includes local medical and public health students could help reach residents who might be missed by public campaigns and hospital outreach efforts. Students often represent their region’s races, ethnicities and backgrounds, which can make it easier for them to connect with communities that are hard to reach and might not trust vaccination.

The problem of getting people vaccinated quickly isn’t just about supply – it’s also about having enough people to carry out vaccinations, particularly in hard-to-reach communities.

If quickly mobilized on a large scale, a vaccine corps could directly meet three important challenges: accelerating the nationwide rollout of COVID-19 vaccines, ensuring that doses are distributed equitably to all and delivering on the promise that all Americans are able to benefit from major medical and public health advances.

Medical, nursing, pharmacy and other health students, as well as retired or unemployed clinicians, could deliver shots, monitor people who were just vaccinated or schedule the second doses that are required for the Pfizer and Moderna vaccines to be fully effective.

Reaching underserved communities – including their own

In particular, a large, well-organized vaccine corps could play a crucial role in reaching out to communities that are underserved, overlooked or hard to reach.

Corps members could staff phone banks to help people who lack internet or struggle to use online scheduling systems find vaccines in their areas and make appointments.

Our students in the vaccine corps have already helped administer vaccines in public housing complexes and homeless and domestic violence shelters. They could also provide transportation to vaccination sites or take doses directly to homebound elders who cannot safely venture out. In Alaska, for example, vaccine providers have been going out by plane and sled to remote villages to reach thousands of residents.

Members of a vaccination corps who share race or ethnicity with the community can also have an impact on overcoming people’s concerns about getting the vaccine. That’s important.

A poll released Feb. 10, conducted by the Associated Press and NORC Center for Public Affairs Research, found that only 57% of Black U.S. residents said they would definitely or probably get the COVID-19 vaccine, compared to 65% of Americans who identified as Hispanic and 68% as white. Fewer than half of Black Americans surveyed in a separate Kaiser Family Foundation poll in late January believed the needs of Black people were being taken into account.

Rural areas face similar concerns, as well as the geographical challenges of reaching people in remote areas. The Kaiser Family Foundation has found that people who live in rural areas are “among the most vaccine hesitant groups.” In mid-January, it found that 29% of rural Americans surveyed either definitely did not want to get the vaccine or said they would do so only if required.

If we extrapolate these vaccine hesitancy survey results, suggesting that as many as three or four out of every 10 Americans may avoid inoculation, public health officials’ hopes of reaching herd immunity will be in jeopardy.

The potential for scaling up

The U.S. has a long history of creating health corps. After the Sept. 11 attacks, the federal government launched the volunteer Medical Reserve Corps to mobilize current and former medical professionals and others with needed health skills during emergencies. Several Medical Reserve Corps units around the country are now assisting vaccination efforts.

This concept could be expanded, including by partnering with universities, to have wider, game-changing reach. The model of service our students are testing opens up many possibilities, limited only by a lack of will and imagination.