Why The American People Should Fear Antifa 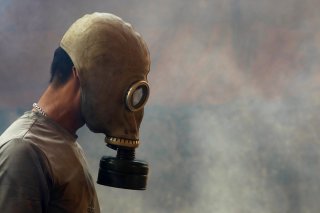 On Wednesday, January 20, 2021, as celebrations were well underway in Washington, D.C. to mark the inauguration of President Joe Biden, across the country in Washington State violence was unfolding. It wasn't supporters of now former President Donald Trump or even any extreme right-wing group that took to the streets.

Rather it was Antifa militants behind the mayhem in Seattle.

For the past four years, the loose collection of supposed "anti-fascists" had been seen by many – including the mainstream American media – as simply a radical movement that supported progressive and liberal causes. The group had even been hailed at times for "protecting" liberal protesters, despite the fact that violence seemed to follow them at every turn.

Yet on the night of the inauguration, it was quite a different tune. The "group" that had been against Trump wasn't out to march in support of Biden.

That much was clear as Seattle police confronted more than 100 members of the group as they smashed windows and scrawled graffiti, while they chanted in unison "F—k Trump, f—k Biden too, they don't give a f—k about you," reported The New York Post.

The grievance on that evening was to show their disgust that President Biden dared to call for unity, something that many in the movement are vehemently against.

"Calling for unity with people who actively want to harm people is disgusting," a woman named Anna told the Seattle Times.

The fact that someone could actually use that rationale to participate in the violence shows that Antifa won't back down, and while some may have thought its members would be celebrating the end of the Trump era, it is clear that they aren't really a friend to progressives.

Moreover, Antifa has shown itself to take such strong-arm tactics to combat what it claims is a growing threat of a fascist takeover of America. Such an approach seems like a cure that is as bad as the disease.

The violence several weeks back wasn't limited to Seattle. Similar protests occurred in Portland, Oregon, where members of Antifa also clashed with police and destroyed property.

If anything, these events could be seen as a throwback to the 1968 protests that occurred during the Democratic National Convention in Chicago, only this time around there is no Abby Hoffman as a leader. In fact, there is no known leader of Antifa.

Antifa: A Movement with No Central Structure

Unlike many extreme right-wing organizations that can truly be described as a "group," Antifa is – and has always been – more of a loose movement. One way to describe it would be that it operates as a collection of cells, not much different from radical "liberation" or even "terrorist" collectives – the definition depends of course on your political take on the situation.

In this case, however, it is clear the principal is the same.

There is no group, but rather a collective of small, mostly local groups with little indication that any hierarchy even exists. That makes it difficult to fully understand the purpose and goals of Antifa – and for those opposed to it, very different to counter or, if necessary, stop.

During the 2020 Presidential campaign, President Trump labeled Antifa a terrorist organization, while then-candidate Biden suggested it was more of a movement. It will be worth noting to see if now President Biden's view changes. So far he has been silent on the recent violence noted above.

To many in the United States, Antifa is a relatively new movement and even a new "term" – one that only really emerged during the Trump administration, bolstered by the repeated suggestion that somehow President Trump was a fascist and his supporters openly sought to tear down democracy.

Matters weren't helped after the Unite the Right rally in Charlottesville, Virginia, which took place in May 2017. The rally, which was to publicly oppose the removal of a statue of General Robert E. Lee, attracted members of the alt-right, neo-Confederates, neo-fascists, Klansman, and white nationalists and was met by counter-protesters including those from Antifa.

It was then that the group gained mainstream notoriety and it was seen (at times praised) for its efforts to stand up to the right-wing extremists. The largely overlooked fact is that violence only occurred because of the presence of two extremist factions. It could be argued the event would have been a minor blip on the radar – a meeting of extremist nobodies, but the fact it turned violent has made it infamous.

Former President Trump of course made matters worse, when after condemning the hatred, bigotry, and violence; he referred to "very fine people on both sides."

That was essentially a rallying cry to Antifa, which was seen as a potential new movement brought on by fears of fascism.

In fact, the group was really just a modern re-envisioned version of the original "Antifaschistische Aktion" – which was established by the Communist Party of Germany to counter the growing Nazi movement in Germany in the early 1930s. When Adolf Hitler took power in 1933, the group went underground.

In East Germany, the Antifa groups absorbed into the state, and while West Germany had no actual Antifa movement, there were certainly radicalized left-wing movements such as the Red Army Faction and Revolutionary Cells. Those groups took on terrorist actions and tactics, but typically it was done in the name of anti-fascism and anti-imperialism.

The reunification of Germany in 1990 brought the Antifa movement out in full force and it generally has continued with its anti-imperialist, anti-western ideology. While not anti-Semitic, many in the movement certainly have anti-Zionist sentiments.

The Anti-Defamation League (ADL) attempted to describe Antifa's goals: "Their ideology is rooted in the assumption that the Nazi party would never have been able to come to power in Germany if people had more aggressively fought them in the streets in the 1920s and 30s. Most antifa come from the anarchist movement or from the far left, though since the 2016 presidential election, some people with more mainstream political backgrounds have also joined their ranks."

In the United States, Antifa has not been especially organized and it has worked rather as a loose affiliation of local activists rarely beyond even regional aspirations. As a movement, it had reached the United States by the end of the 1970s, but it has really only been so noted in the mainstream media in the past decade, and really came to prominence with the election of Donald Trump in 2016.

As CBSnews.com explained, it isn't so much what the group supports, "but what they oppose: Fascism, nationalist, far-right ideologies, white supremacy, authoritarianism, racism, homophobia and xenophobia. Some antifa activists also denounce capitalism and the government overall."

Because of its recent history of engaging with Trump supporters, the group has largely been seen as being on the left of the political spectrum. However, it is not affiliated with President Biden – and clearly, members in the Pacific Northwest sent a strong message to remind everyone of that fact.

Some have seen irony in the fact that as a group supposedly opposed to fascism, their tactics can border on the fascistic. They have been known to target those they see as members of the "alt-right" in person and online. They have released personal information about their opponents online – a technique known as "doxxing." Antifa members have been proud of the fact that they've gotten some alt-right supporters fired from their jobs.

Perhaps the most ominous aspect of the movement is that the presence of Antifa almost never has a calming effect. Members have shown up at Black Lives Matters protests, which have led to clashes with police and in too many cases, destruction of private property.

Antifa members also seem not only ready for a fight, but eager to see protests turn violent. Antifa supports often dress all in black, cover their faces with masks and wear helmets so that they can't be identified by opposing groups or the police. It also provides them with an intimidating tactic, described by the BBC as the "black bloc" – which also allows them to move together as one anonymous group during events, even if its members aren't readily known to one another.

Because of these tactics, it has been noted that peaceful protests or counter-protests are more likely to turn violent by the mere presence of Antifa.

As the ADL also noted, "Most people who show up to counter or oppose white supremacist public events are peaceful demonstrators, but when antifa show up, as they frequently do, they can increase the chances that an event may turn violent."

Yet, some support its tactics. The fact they will "dox" someone and resort to violent tactics is seen as necessary to stop what they see as a fascist threat. Of course, as has been seen in Seattle and Portland, it may not be democracy that Antifa actually wants but rather chaos.