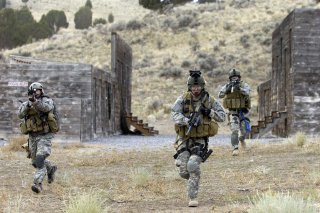 The U.S. military and intelligence community have been using this technology for decades now and it’s becoming increasingly more prevalent. With the apparent return of Great Power Competition—the struggle for influence, leverage, and resources between the U.S. and its near-peer competitors China and Russia—the special operations community, the tip of the spear of the U.S. military, has been investing more in Artificial Intelligence technologies

What is Artificial Intelligence?

Nowadays, in an age of information overload, the issue the military and intelligence community have to deal with isn’t having too little data to work with as it once may have been, but rather how to process all of the available data to find and utilize what is important quickly and efficiently.

That is where Artificial Intelligence, as a filtering and selection mission-planning tool, can come in and sift out the data that is just noise to provide commanders, decision-makers, and troops with the only information they need to do their job. It’s a tall order, for sure, but doable with the right approach and priorities.

General Richard Clarke, SOCOM’s commander, has emphasized the importance of Artificial Intelligence and cyberwarfare, going as far as to suggest that the future of U.S. special operations might not be with the Delta Force operator on the ground but rather with the cyber commando behind a keyboard.

“Artificial Intelligence should assist a commander or operator to make better decisions, not make the decisions for them, and that’s where I think a lot of people get it mixed,” Herm Hasken a partner and senior operations consultant at MarkPoint Technologies, told Sandboxx News.

MarkPoint Technologies provides body-worn sensors that process and distribute signals detected in the proximity of the operator to U.S. government partners. Such advanced computing introduced in the tactical domain gives an advantage to special operators and makes them more effective.

“In some cases, Artificial Intelligence might help you process and act upon very simple tasks in order to reduce the cognitive load on the operator—doing some things for you, so you won’t spend time worrying about it, receiving data and making sense of it in the midst of a deluge of data coming at you,” Hasken added.

Related: WHAT SPECIAL OPERATORS SAY ABOUT THE ARMED OVERWATCH PROGRAM

SOCOM is partnering with the private industry and academia to improve its Artificial Intelligence capabilities. An online course collaboration between SOCOM and MIT is part of this outreach effort. In the launching of the course, Clarke said that Artificial Intelligence and data-driven technology are integral parts of SOCOM’s preparation to maintain its qualitative advantage over its competitors and also to ensure that its commandos are ready for renewed Great Power Competition.

However, SOCOM, and indeed the Pentagon, are having trouble attracting top talent. In a recent Global SOF Foundation forum, Joint Artificial Intelligence Center Chief Technical Officer Nand Mulchandani said that pay, location, and the necessary inconveniences that come with military life—he offered a personal example of him having to fly from California to Washington D.C. to work because that is where a secured computer with access to a classified network is located—hamstring recruiting efforts. And although that has always been true about the military, it is slightly different when recruiting individuals with high-value skills and not just grunts or box kickers.

“SOCOM and JSOC need more data analytics and processing. Take for example the Iron Dome system in Israel. The only data it needs is that a missile is in the air, heading toward Israel, and where it can intercept and destroy it. That’s the only AI it needs. To detect, see, and stop it. If the AI can do the same for an operator, that’s the AI I want. I need to basically perform the same function: what’s coming after me, where do I meet it, and how do I stop it?” Hasken added.

Artificial Intelligence isn’t without vulnerabilities, both internal and external. Enemy tampering and attacks can hamper weapon systems and technology that rely on Artificial Intelligence, while a simple coding error or data oversight can have the same result, with potentially grave consequences for the troops on the ground. For example, a programmer can train Artificial Intelligence to look for specific faces of people for targeting purposes but small, intentional changes to those faces might mislead it, even if humans wouldn’t readily notice the difference.

To maintain a military edge over its near-peer competitors, the U.S. military and its special operations forces need to continue to invest in Artificial Intelligence but also have realistic aims that will translate into operational and tactical advantages on the ground.