Why Americans are Tiring of Social Distancing and Hand-Washing 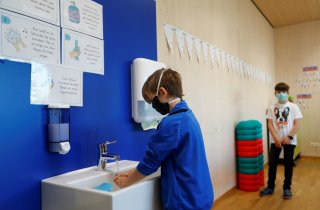 States are beginning to open up their economies after successfully slowing the spread of the coronavirus. Much of the credit for that goes to Americans dutifully following prescribed behavior.

People have been washing their hands frequently, maintaining physical distance from others, wearing face masks, sanitizing door knobs and even disinfecting food and packages brought into the house.

But in order to continue to contain the spread of the virus, we’ll still need to sustain these behaviors for weeks and maybe months to come. Will people be able to maintain their vigilance over time?

As scholars who study health-related behavior change, we’re skeptical. While continuing to wash your hands and stay six feet away from others doesn’t seem so hard for an individual, the problem is that people are unable to “see” the benefits of their actions – and thus often don’t recognize just how important they are.

As a result, adherence to these protective behaviors could wane over time without policies designed to sustain them.

It is, in fact, remarkable to us that efforts to promote hygiene measures have been as successful as they have been. That’s because they are almost the embodiment of the types of protective measures that people are especially bad at taking.

The most obvious reasons are that maintaining physical distances and constantly washing hands are inconvenient and require constant vigilance. The costs of these behaviors are immediate, but the benefits are delayed.

A more subtle and equally important reason, however, is that the benefits are intangible: You can’t touch, taste, feel or see the benefits of, for example, wiping off your door knob.

One reason the benefits are intangible is that people tend to be insensitive to even dramatic changes in probabilities – such as from one-in-a-thousand chance to one-in-a-million chance – when it comes to small probability events such as the chance of contracting coronavirus.

This is true unless the change in probability leads to certainty that the event will not occur, which is why people are not eager to engage in preventive behaviors unless they completely eliminate the risk, as research by psychologists has shown.

For example, one study found that people were willing to pay much more to reduce a pesticide risk from 5 in 10,000 to 0 in 10,000 than from 15 in 10,000 to 10 in 10,000, even though the actual reduction in risk was identical. A similar study concluded that people were more attracted to a vaccine said to entirely eliminate a 10% risk for a disease than to one that reduced the risk from 20% to 10%. And a third one found that a vaccine described as 100% effective in preventing 70% of known cases of a disease was more appealing than one that was 70% effective in preventing all cases even though both would have the same net effect.

Even if we follow all recommendations about sheltering in place, washing hands, wearing masks and disinfecting grocery deliveries, we can only reduce and not eliminate the chance of catching COVID-19.

Will people continue to feel that it’s really worth it to sanitize all those plastic bags from the supermarket if the only effect is to reduce the odds from, say, 1 in 2,000 to 1 in 3,000?

Another reason the benefits of prevention seem intangible is that we don’t get useful feedback about the effects of our actions.

The microbes are invisible, so we have no idea whether we had them before we washed our hands or have gotten rid of them after we have done so.

In addition, we get no feedback about how a particular protective action has changed our probability of getting infected. If all of our actions work, the outcome is that we don’t get sick. But not being sick was the state we were in before we took those actions. Thus, it seems as if the preventive actions caused nothing to happen because we can’t see the negative outcome that might have happened if we hadn’t been so vigilant.

Documenting such a pattern, studies of treatment for depressionhave found that many patients skip or discontinue taking antidepressants as soon as their symptoms improve, leading to relapse.

The same is likely true at a societal level. If all the sacrifices people are making pay off in the form of lower infection rates, people will point to those low rates as evidence that the sacrifices weren’t actually necessary. Such a pattern has been documented among anti-vaxxers, who claim that low rates of diseases that are vaccinated against are evidence that the vaccine wasn’t needed in the first place.

When one is healthy, it is very difficult to imagine being sick – even when one has been sick in the past. This probably has something to do with low rates of adherence to lifesaving medications.

For example, one year after hospitalization for a heart attack, nearly half of patients prescribed statins stop taking them. And rates of medication adherence for acute diabetics are similarly dismal.

In both cases, people who are healthy – or even those who are sick but not experiencing immediate symptoms – don’t appear to appreciate the risks of failing to protect themselves.

So how can we sustain vigilance in the face of pervasive intangibility?

We could remind ourselves that life rarely offers certainty, and behaviors that reduce risk significantly are worth continuing even if they don’t eliminate it altogether. Or we could try to keep in mind those who have been hospitalized or even killed by COVID-19 – a fate that could befall any of us.

Realistically, however, neither of these approaches is likely to have much traction due to the intangibility of the effects of preventive behaviors. And so the best policies are those that eliminate the need for individual decision-making altogether, such as when stores ensure grocery carts and public spaces are kept well sanitized.

As for policymakers, they could compel companies to maintain these measures as a condition of being open. And they could design regulations that require people to continue to wear face masks in public or don gloves when entering public buildings, while lightly punishing those who don’t comply. Small penalties can have a huge impact on behavior.

The longer these behaviors are maintained, the more likely it is that they’ll become habitual, overcoming the problem of their benefits being intangible. And society will be able to get back to some semblance of normal while keeping the lid on the coronavirus.

This is an updated version of an article originally published on April 20, 2020.