Why America's M60 Machine Gun Has Stood the Test of Time 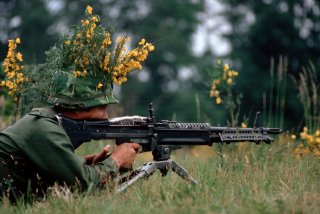 Here's What You Need to Know: In the door gunner role, M60s could fire upwards of 5000 rounds a day, laying down constant suppressing fire onto landing zones before helicopters came in.

Another big problem was with the quick-change barrel. Since the bipod was on the barrel on the original M60, replacing the barrel meant the gun had to be dismounted from a firing position, maneuvered into a position to accept a fresh barrel, and remounted. This was far harder than the original MG42 barrel change.