Why are Control Measures Stopping the Flu and Not Coronavirus? 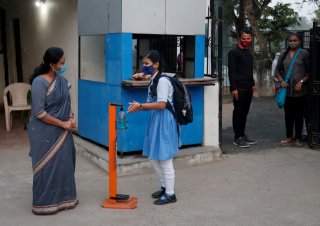 As the COVID-19 pandemic rages, other respiratory illnesses have been unusually quiet this year. Fears of a dangerous influenza and COVID-19 “syndemic” have not come to pass as influenza cases reached some of the lowest rates ever observed.

The near absence of the flu might reflect increased rates of vaccination, as seen in the US, but distancing, hand washing and masking have probably played an even bigger role. If these measures are so effective against the flu, though, why is SARS-CoV-2 still spreading?

Reproduction or “R” numbers measure how well a disease spreads and, therefore, how difficult it is to control. The number tells us how many people a single infected person will probably infect. The reproduction number for seasonal influenza usually hovers between 1.2 to 1.5, whereas early estimates for SARS-CoV-2 ranged from 2 to 4. This means that under “normal” circumstances – in the absence of masking, distancing, frequent hand-washing – SARS-CoV-2 is about twice as infectious as the flu.

To stop an epidemic from spreading, we need to reduce R below 1. That’s a lot easier for seasonal influenza than for SARS-CoV-2. If distancing and masking halved the reproduction number for both illnesses, SARS-CoV-2 would continue to spread while influenza would stop dead in its tracks.

SARS-CoV-2 and influenza spread in similar ways: both can spread via contaminated surfaces, large respiratory droplets and smaller respiratory aerosols. However, the relative importance of each pathway differs between the two viruses.

For influenza, contaminated surfaces and droplets are the main concern. Hand washing, masking and distancing all do a good job preventing this sort of spread.

SARS-CoV-2, on the other hand, features explosive “super-spreading events”, pointing toward the importance of aerosol-based spread. A recent study (not peer-reviewed) supports the idea that increased aerosol-based spread helps explain the different spread patterns of SARS-CoV-2 and influenza.

SARS-CoV-2 is a new virus to humans. Besides small levels of cross-immunity that previous infections with other coronaviruses might have given us (and this is far from certain), our bodies generally can’t detect and fend off an infection from SARS-CoV-2.

This probably reflects something about human behaviour: as people watch SARS-CoV-2 cases in their communities, they adjust their behaviour accordingly. Are cases high? Maybe we should stay in tonight rather than going to a restaurant. Are they low? Maybe we can risk a play date for our kids.

Similar decisions are being made at the community level, with stay-at-home orders, business closures, and mask mandates alternately applied and lifted depending on the severity of the outbreak. This ultimately keeps SARS-CoV-2 right on the edge of its ability to spread.

This means that anything that spreads less well than SARS-CoV-2 is likely to be pushed below the key reproduction number threshold of 1. If this is true, then we should see resurgences of other respiratory infections when SARS-CoV-2 is gone and behavioural restrictions are lifted. This is indeed what happened in Australia: cases of the childhood respiratory virus RSV spiked after the country lifted lockdowns in October. And this was well outside of the normal time when that virus spreads.

It is good news that influenza rates are currently down, but we must remain vigilant. Since influenza hasn’t swept through the population this year and boosted our immunity, we could see spread in the summer months. Next winter’s influenza season might also be unusually severe because of the lack of immunity from this year. Vaccination will be all the more important.

Low levels of influenza circulation could also affect the way the virus evolves. Scientists will need to monitor this closely since anticipating the virus’ evolution is key to formulating next season’s vaccine.

Meanwhile, we can take heart that the measures we’ve adopted to reduce SARS-CoV-2 are working, as proven by the reduction in other respiratory illnesses. If it weren’t for these measures, COVID-19 would be an even bigger problem than it is now. As we face both new and familiar infectious disease threats in the future, we can now be confident that we have a set of powerful tools available to help keep ourselves healthy.