Why the Army Prepares for Future Battlefields 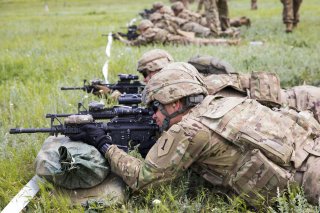 Here's What You Need To Remember: The U.S. Army is an armed force with a truly global reach. At any given time, America’s premier land power operates on several different continents simultaneously, from hot, dry deserts to humid jungles and sprawling cities. Its infantrymen carry a weapon whose lineage dates back to Vietnam but which has been constantly improved to become the weapon it is today. Rugged, simple and accurate, the M4 carbine is the standard infantry weapon of not just the Army but all of America’s ground forces.

Despite earlier battlefield success, once fielded in large numbers the M16 quickly started racking up complaints. A last-minute change in propellant powder, as well as the erroneous belief that the rifle never needed cleaning, caused many jams on the battlefield. Although the problems were eventually sorted out and an improved version, the M16A1, was fielded in 1967, the weapon developed a reputation as being an unreliable weapon. In the mid-1980s the A1 was replaced with the M16A2, which featured a thicker barrel and three-round burst capability.

The Army is also upgrading its existing M4s to a new M4A1 standard. The upgrade consists of a new fire control group that replaces three-round burst fire mode to full automatic, along with an improved trigger and a heavier barrel for longer, more sustained fire before overheating. The A1 also has ambidextrous controls, for lefties. New rifles are being delivered to the M4A1 standard, and older rifles are being converted at a rate of approximately three hundred a day.

No rifle is an ideal fit for the U.S. Armed Forces, which must expect to fight in all environments and climates. A heavier round, harder-hitting round would reduce the amount of ammunition soldiers could carry and place additional burdens on the logistical system. A longer rifle barrel imparts greater range and velocity but makes a weapon unwieldy indoors. Design tradeoffs and compromises are inevitable and must be made with existing and future battlefields in mind. All things considered, the M4 is a very good compromise weapon.

This article was first published in February 2017.