Why the Army's Old M9 Barretta Gun Won't Go Away 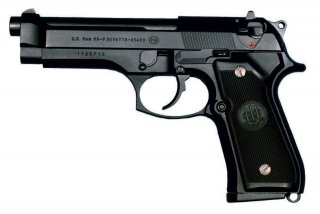 Beretta’s M9 was introduced during the Reagan era in 1985. It replaced the iconic M1911, which had been in service for nearly eight decades. Though the M1911 had a reputation for reliability, and excellent stopping power thanks to the large .45 ACP cartridge it was chambered in, it suffered from low magazine capacity, necessitating a replacement: the Beretta M9.

Though the M1911 had mostly been phased out by the 1990s, one notable exception was the United States Marine Corps, which retained specialized versions of the M1911 platform for some reconnaissance units.

Partially necessitating the switch from a larger, more powerful M1911 to the compact M9 was NATO’s selection of the 9x19mm cartridge as their standard-issue handgun cartridge. In addition, the Department of Defense wanted to simplify weapon logistics by selecting a common pistol for use with all service branches.

What Makes the M9 Special:

The M9 is ergonomic and can be used by both left- and right-handed shooters thanks to its ambidextrous safety and magazine release.

It also benefits from high corrosion resistance due to its chromed barrel and durable surface coating.

The M9 also took full advantage of a smaller 9x19mm cartridge, offering a 15 round magazine that gave the M9 double the magazine capacity when compared to the M1911.

Though the M9 has been in service for over a quarter of a century, it is not without its detractors. Perhaps the M9’s biggest critique is the limited stopping power of the 9x19mm cartridge it is chambered in, especially when compared to the larger and more powerful .45 ACP. Secondary complaints relate to reliability and durability, with feeding failures being prominently featured.

Despite the M9’s excellent construction, overall reputation for reliability, and positive track record with the United States military, it is slowly being phased out as America’s standard-issue sidearm.

The XM17 Modular Handgun System competition, a joint U.S. Army-U.S. Air Force competition, awarded a 10-year, $580 million contract to SIG Sauer for their M17 and M18 pistols. The contract is expected to ultimately deliver about 200,000 pistols to the Army, with an additional 400,000 pistols for the other service branches.

Both pistols are based on SIG’s P320 pistol platform, and offer advantages in magazine capacity as well as weight and accuracy. Though they’re also chambered in the ubiquitous 9x19mm Parabellum cartridge (as is the M9), SIG Sauer sweetened their bid by partnering with Winchester to offer two new and extremely lethal types of ammunition, ultimately winning the MHS competition.

Still, despite the aforementioned M9 imperfections and near-future replacement with a more modern sidearm, Beretta’s M9 is a good, reliable firearm when taken as a whole. It remains a popular civilian firearm as well, often used as a personal defense weapon.